It is a SC tradition that on Thursday of the SC conference (this year: November 17th), next year’s conference is unveiled to the public. In some sense, it is the “official” birth of the SC17 conference, even if I started to work on its organization now almost two years ago. It is also the moment, the SC17 website is finally made available to the public. 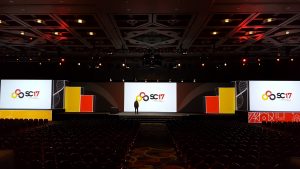 Me on the stage for the rehearsal of the SC17 preview session. — Picture by SC 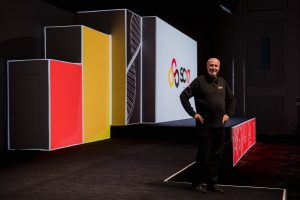 In a special preview session before the Thursday morning plenary session, I had the chance to present our SC17 preview video.

The video introduces our SC17 tag line: HPC connects! We chose this tagline highlighting the fact that the most important reason to attend the SC conference (provided by the annual attendee questionnaire results) is “Networking with friends/colleagues”.

I sure hope you like our video! We put quite some efforts into creating it! The producer of the video is Jennifer Boyd, a nine-times Emmy award winner! The music was composed by Michael Bacon (yes, he is the brother of Kevin Bacon, the Hollywood actor) who is the composer of many Hollywood and TV movies and documentaries (and he also won a Grammy!).

I know what you think now: Is it a coincidence that the colors of the logo match the colors of the Belgian flag? Yes, I can assure you, this is pure coincidence 😉 The story behind the logo is that our story behind the tagline (HPC connects) actually has three components: HPC connecting minds, systems, and science! That is, HPC connecting the people working in HPC, the systems (clusters, instruments, storage, visualization and analytics components) they are using, collaboratively working in different areas of  science (computer and application sciences). The three aspects are symbolized by the three circles. Of course, the three aspects cannot clearly be separated, this is why the circles are connected and their color “blend” into each other. The red circle is representing the minds, as red is the color of passion and determination, but also is the color of blood. The black circle (surprise!) is representing the systems (black boxes!). Finally, the yellow (or gold) circle stands for science, as this is the important (and most valuable) output of our communities’ work.

At the conference, we used the logo for the layout of our conference preview booth where we informed attendees about SC17 and Denver, where the conference will be located. 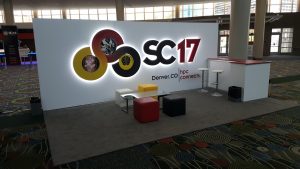 The designer of the booth did a great job! The logo was sticking out of the wall and had a “back-light” made out of LED-strings.  This light effect made quite some impression in the dark entry lobby of the Salt Lake City convention center.

Bernd Mohr is a scientist at the Jülich Supercomputing Centre (JSC) of Forschungszentrum Jülich. He is also deputy head of the JSC division "Application Support". His research centers on Supercomputing in general and especially on performance tools for parallel programming for almost 30 years now.

One Response to “SC17 Officially Live!”