Wow! My own “official” blog! I never thought I would do this one time, but here we go. 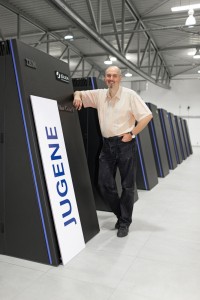 For those who do not know me so well (yet), I am a scientist at the Jülich Supercomputing Centre (JSC) working on Supercomputing, High-Performance Computing and especially performance tools for parallel computing. Besides being researcher, I am also deputy head of the JSC division “Application support”.

I plan (for now) to blog about my research activities and projects, my visits to workshops, conferences and colleagues all over the world, and about my quest to organize SC17.

I am working on performance tools for High-Performance Computing (HPC) for almost 30 years  now, at a time the term “HPC” had not even been invented yet. I have been involved in the development of many open-source performance tools among them TAU, Vampir, KOJAK and currently Score-P and Scalasca. Supercomputers, the biggest and largest computer systems used to solve the world’s toughest problems, are a fascinating research area. The HPC computer hardware architectures, system software and programming models develop so quickly that my work never becomes boring and many exciting research challenges are still ahead of me. If you are interested to learn more about this, and you have some time, you could listen to my podcast about HPC – be aware it is 2.5 hours long and unfortunately, it is in German 🙁

End of 2014, I also got elected the be the General Chair of SC17, the world-largest international conference on high performance computing, networking, storage and analysis attended by over 10,000 people every year. As I am the first non-American after 28 years to organize this conference, it created quite some buzz, for example I made it into the 2015 list “People to Watch” from the online magazine HPCwire. As you can imagine, it is quite an effort to organize a 10,000 attendee multimillion U.S. dollar conference with the help of about 600 volunteers. I will write in the next three years about this effort in a series of blog articles tentatively called “Things you never wanted to learn about SC, but I tell you anyhow!” 😉 If you are interested in this topic, check out the SC15 blog article “10 Questions with SC17 General Chair Bernd Mohr”.

P.S. In case you wonder why the blog is called “Do you know Bernd Mohr?”: The story is that one of our lab directors (name known to the author ;-)) told me once that many times he visits new places or meets new persons, and tells them that he is from Jülich, they often ask him “So you know Bernd Mohr?”.