This fieldtrip is a highly interdisciplinary fieldtrip. In theory, this means that we can all broaden our knowledge about the neighbouring fields of geology, geography, archaeology and ecology. In reality, this means that it is a little different than the fieldtrips our participants are used to. And what happens when you take people out of their known environment and expose them to changed conditions? Nagging! Usually it takes about a week before the geologists start to complain. This year`s geologists seem to be particularly petty, because it took only one day for them to notice ‘we didn`t look at any outcrops yesterday’. (If you read that last bit in a whiny voice, you are correct.) 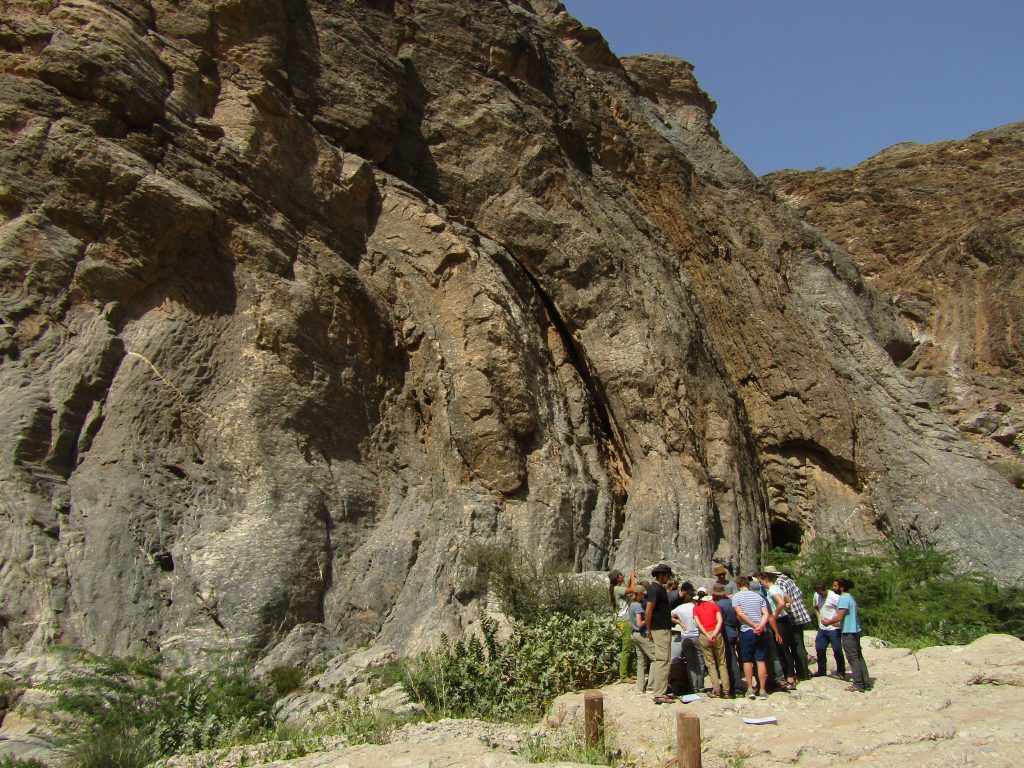 Eye to eye with the dents of a geological accident in Wady Mayh. © Michaela Falkenroth

Of course, technically, they are right, the closest we touched upon geology yesterday was a distant view of the ophiolite sequence. But what they don`t know yet is that we will be looking mostly at rocks for the remaining weeks and we only do the urban-planning, cultural development, human geography thing at the beginning to lure the non-geologists into a false sense of security. (Joking of course – we`re interdisciplinary from start to finish, better begin enjoying it now dear geologists.)

We are not in Muscat anymore. The morning of our second day starts on sand beach with the sunrise above the Indian Ocean, continues with coffee and fruit salat and ends with what our eager geologists seem to crave the most in life: outcrops. But first, we get an introduction to the geology of Oman.

A very popular question back at home is: why do you take a geological excursion to Oman? The secret lies not in the sauce but in the crust. 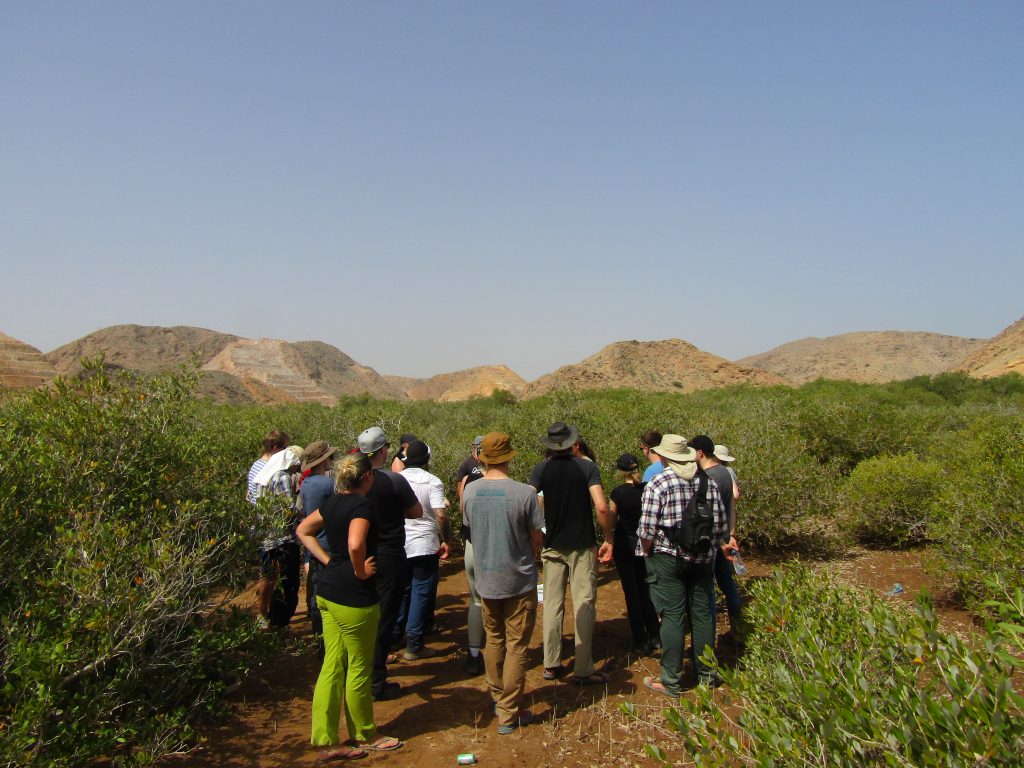 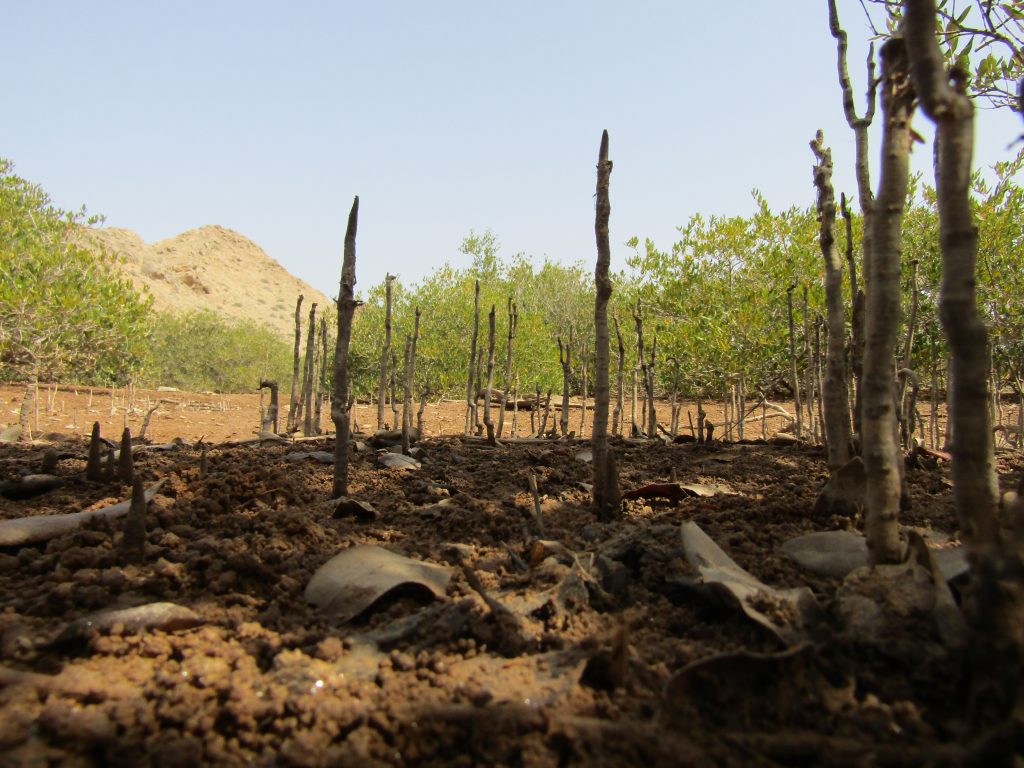 The Hajar Mountains, also called the Rocky Mountains of Oman (‘hajar’ meaning ‘rock’ in Arabic), are an up to 3,000 m high mountain chain of limestone and ophiolite and this ophiolite is one of the reasons why Oman, which is unknown to most people, is famous among geologists. (I mean really famous – you should see their little, rock-loving faces light up, when Oman is mentioned.) The so-called Semail Ophiolite is the largest continuous ophiolite complex in the world. An ophiolite contains of oceanic crust and mantle rocks that are denser than continental crust and thus are rarely on top when continental and oceanic crust collide. Usually these rocks disappear beneath continents and we never get to see them on the surface. As I said: geological accident.

After this introduction, it is obvious that we will see a lot of the Hajar Mountains during the next two weeks and we start right now with the sediment naps that were displaced together with the ophiolite. When continental and oceanic crust collide, it is a violent process. Like in every other accident there will be denting and scratching, the only difference is that it happens unimaginable slow. Watching a geological accident live will, admittedly, not be very exciting. Lucky for us the Hajar Mountains accident happened 60 Million years ago and we can now look at the denting. The perfect place for this is Wadi Mayh, a broad, gravel filled valley, where you drive on the disconnected pieces of asphalt that were spared by cyclone Gonu. The steep rock walls left and right of the canyon display mega fold structures that turn every structural geologist into a child in a candy store. ‘Eye to eye with the mega-sheath fold’ titles one of the publications about this place, and well, it`s not exaggerating. These folds are massive, complicated, and beautiful.

Now that the geologists are satisfied, we move on to some other stops. We visit the Wadi Dayqah Dam, a giant project that secures an emergency water supply to Muscat and is supposed to recharge the stressed groundwater aquifers.

And then we get to look at the one plant that is not cultivated in the botanical gardens, but is without doubt a superstar among plants and very special to one of us: the mangrove Avicennia marina. Valeska takes us into a mangrove ecosystem that sits in a muddy lagoon and at the heart of her PhD project on paleomangroves as climate archives. 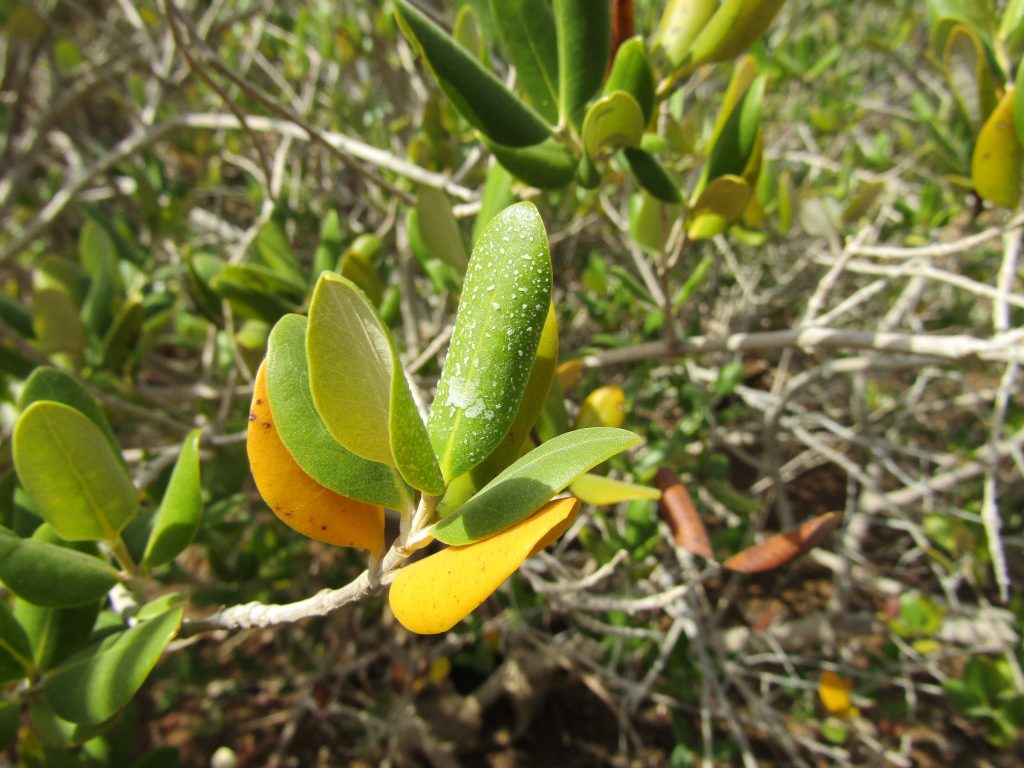 Salt crusts on the leaves of Avicennia marina, a mangrove superstar and the only remaining mangrove in Oman. © Michaela Falkenroth

Avicennia marina is the most robust among all mangroves; it tolerates even the most salty conditions because of its ability to precipitate salt from its leaves. Nowadays it is the only remaining kind of mangrove in Oman. Mangroves are a valuable natural resource to Oman, which is why the government has started a reforestation program along the coastline. The mangrove forests do not only provide wood in a country that is somewhat scarce on the tree-front, but are also a layer of coastal protection against extreme wave events and a diverse ecosystem. We learn about how the plant breathe through aerial roots and how microplastic is introduced into the system by crabs. 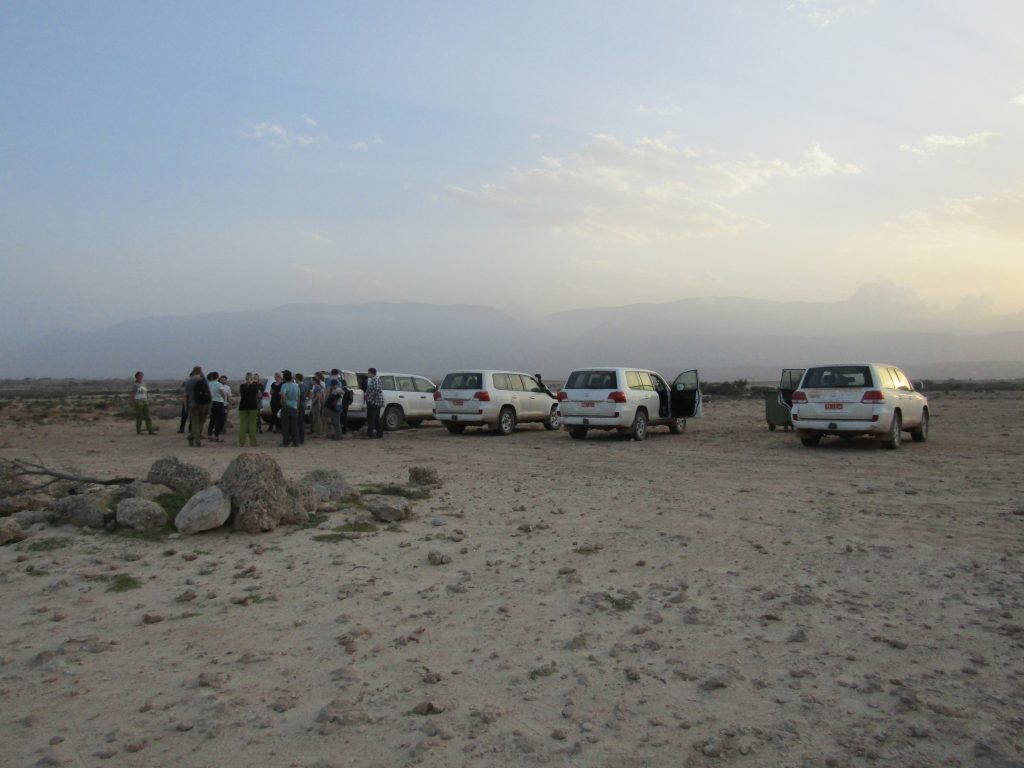 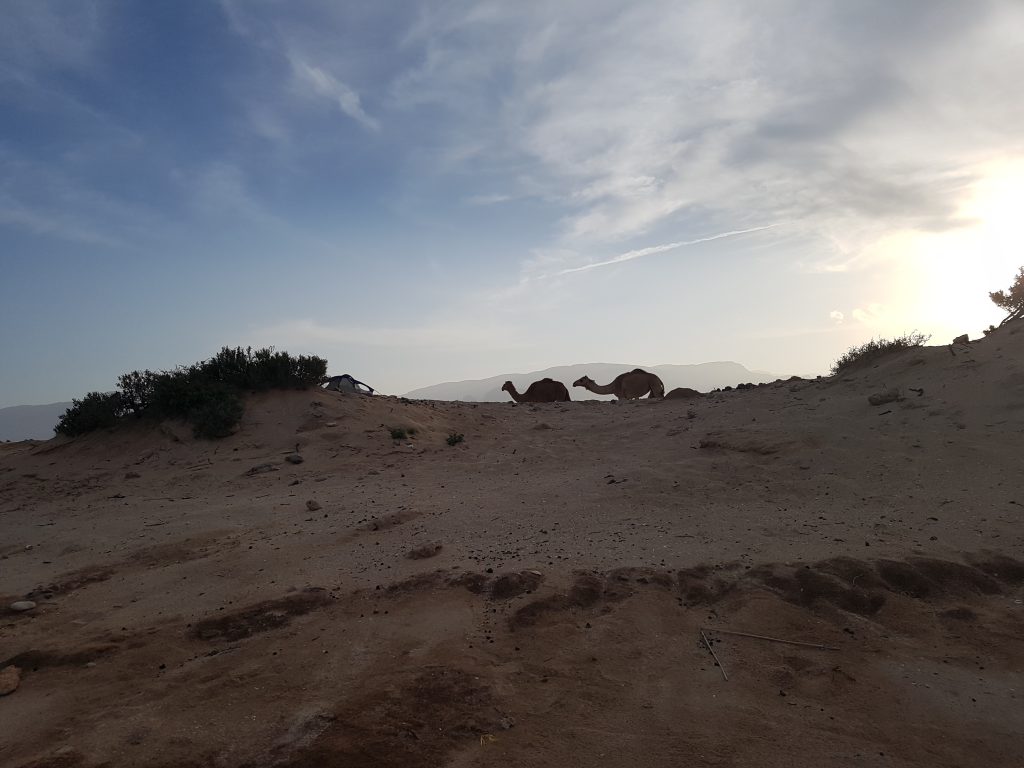 Camels walking through the camp in Fins beach. © Michaela Falkenroth

I can only speak for myself, but this geologist is very pleased with this day. Especially so, as it ends with a scenic drive through deep canyons, rivers and over dirt roads towards Fins, the beach where our camp will settle in for the next two days and also the centre of Kim`s and my PhD projects.