Two scientific flights were successfully performed in the last days. Now HALO will get its deserved Christmas break. Also the teams are in need for some days off. Due to unforeseen problems some of them had to work around the clock for the last two weeks. Everybody is relieved, that most of the instruments could earn valuable data. The GLORIA team from Jülich and Karlsruhe will get some homework to think about during the holidays as the instrument is unfortunately still not performing as expected. Nevertheless, we are confident to solve the problems for the campaign phase in Sweden.

Today we are packing three containers with our equipment to send them to Kiruna, Sweden, where our campaign base will be in January and March. The in-situ instruments need different gases for their calibration procedures. The GLORIA team will send computers and a lot of spare parts, as for example a second spectrometer. 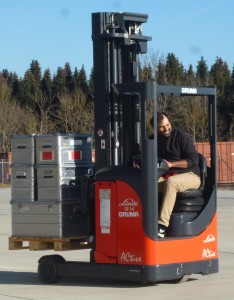 Besides the scientific equipment, everybody can take some personal belongings which are difficult to transport by plane. Some colleagues are, for example, taking their cross-country skis as there is a run in Kiruna. Others will send warm clothes (we expect more than -20°C) or some food as the prices in Sweden are quite expensive. However, one has to be careful to send only things which can be frozen, as the container will be outside on its whole way. So glass bottles are not the best idea. 😉

With that I say goodbye for this year and wish everyone a Merry Christmas and relaxed holidays!