After a successfull 9 hours flight HALO arrived at the Arena Artica in Kiruna yesterday. The flight was quite challenging for the aircraft and all the scientific instruments. Nevertheless lots of scientific interesting data has been accumulated. The instruments from the Research Center Jülich operated for the first time during this campaign without any problems. 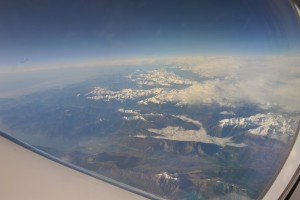 View of the Alps from the HALO Aircraft. Picture by Erik Kretschmer, KIT.

HALO started yesterday at 9am in Oberpfaffenhofen and crossed the Alps over Innsbruck. The way to the south was added to the direct transfer, because of an interesting structure in the tropopause over Sicily. Here the temperature dropped within 30s by 10°C. Due to this also the pressure decreased and the aircraft was ‘falling’ down for a short time. This was a challenging manoeuvre for the pilots, where all their skills were needed. As a small reward for their effort they got an awesome view of the Mount Etna afterwards. 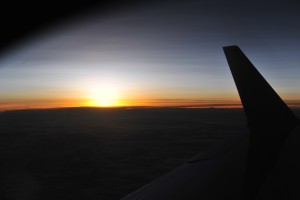 View of the sunset from HALO. Above the sun Polar Stratospheric Clouds can be seen. Picture by Erik Kretschmer, KIT.

On the way back to Kiruna the route was straight towards the North Pole till 72°N. There was the cold pool of the startosphere where an ambient temperature of almost -70°C was measured. The minimum operation temperature of the aircraft at this speed would have been -76°C. If this temperature is exceeded the plane has to descend to a warmer altitude.
In these cold temperatures Polar Stratospheric Clouds (PSCs) can form. In the stratosphere the water vapour concentration is very low. Therefore common water vapour clouds do not exist. If the temperatures approach -80°C nitric or sulfuric acid particles freeze and build these clouds. PSCs are a source of ozone depletion in the Arctic and therefore can increase the formation of the Ozone Hole.

After 9 hours HALO finally landed at Kiruna airport. The picture shows HALO approaching the Arena Arctica Hangar and dispersing snow with its engines. 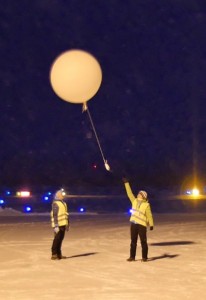 Launch of a weather balloon in front of the Arena Arctica. Picture by Peter Preusse, FZJ.

Just before the landing of HALO some colleagues launched a weather ballon to get a detailed meteorological profile. These ballons are started at least twice a day here in Kiruna. Other stations on the same latitude circle in Norway and Finland start ballons at the same times to compare the data and derive gravity waves from the temperature and wind profils measured by the sondes.