Today we want to do a long flight with HALO towards Greenland. How is this decision made? Why today? And why to Greenland? In my blog post today I will give a short overview about how the planning process looks like.

Everything starts with a group of scientists (most of them climate modelers and meteorologists) who produce forecast data. Basically all the forecasts are based on the meteorological forecast from the European Centre for Medium-Range Weather Forecasts (ECMWF). They do not only provide us with the “normal” weather forcast, but also stratospheric winds and temperatures that are needed to drive our models. The Chemical Lagrangian Model of the Stratosphere (CLaMS) is such a model, that was develped in Jülich. It can calculate the global distribution of chemical trace gases, that helps us with finding the most interesting locations and the best flight paths. A forecast of the trace gas N2O of the CLAMS model for today’s flight is shown in the figure below. 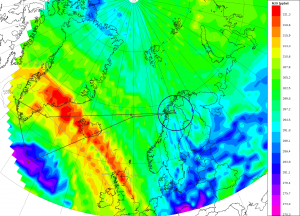 CLAMS forecast of N2O at 150hPa, which is the flight altitude of HALO. The planned flightpath is indicated with the dark red line. Forecast by Jens-Uwe Grooß, FZJ.

N2O and Ozone are tracers (or markers) for tropospheric and stratosphereic air, respectively. Tropospheric air has high values of N2O and stratospheric air high values of Ozone. The forecast for this sunday showed an exceptional high tropopause over 14 km altitude, that is normally not seen at these latitudes. By measuring N2O and Ozone (and other species) we will see the transition of the stratosphere to the troposphere at flight altitude of HALO. With this data, we can study the air mass exchange processes between the stratosphere and the troposphere for the case of this unusula event. 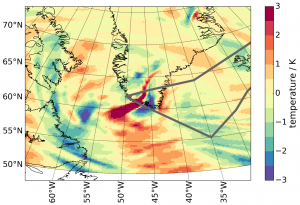 Temperature fluctuations at 12km altitude. In gray the flightpath is shown. Over the south tip of Greenland a gravity wave structure can be seen.

The remote sensing group of the IEK-7 is very interested in gravity waves, which are waves in the air produced for example by air flow (wind) over a mountain ridge. Gravity waves can be seen in the temperature and wind structures of the atmosphere. To forecast gravity waves the ECMWF temperature forecast is used. To distinugish the wave structures from the background situation the zonal mean is substracted from the data. A forecast of the temperature fluctuations for today 18 UTC is shown in the plot on the left. A strong wave pattern above the south tip of Greenland can be seen. As the temperature amplitudes are above 1.5°C the waves can be measured with the infrared limb sounder GLORIA.
For todays flight we are therefore able to combine multiple targets into one long HALO flight. Due to the above mentioned scientific targets a flight pattern as shown in the CLAMS forecast plot is chosen. Afterwards, this scientifically identified flight path has to be accepted by the air traffic control before the flight. 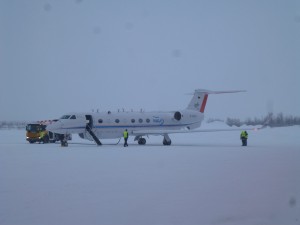 HALO on the apron before the flight has been cancelled. Picture by Isabell Krisch.

Unfortunatelly it is snowing today in Kiruna. While the plane is standing outside on the apron it cools down and the snow starts to freeze on plane. A frozen airplane cannot take off and a deicing would be needed. HALO has a lot of air inlets for scientific in-situ instruments. A chemical deicing would pollute the inlets and the instruments would not be able to measure afterwards. Therefore a deicing is not an option for HALO. Due to these circumstances today the flight has been cancelled just before take-off and the plane is on its way back to the Hangar.
The next flight is planned for tomorrow. The ground weather forecast predicts that the snow fall will stop tonight. So we hope that a flight can be performed.