Today a flight with both planes HALO and Falcon to southern Scandinavia was planned. On that flight we want to measure gravity waves. Gravity waves are periodic movements of the air, which lead to temperature and wind fluctuations. Gravity waves are excited in the troposphere for example through wind blowing over a mountain ridge. They transport energy from the troposphere into the higher stratosphere. The breaking waves deposit energy and drive global atmospheric circulations. Over southern Scandinava the polar jet is today blowing over the Norwegian Alps, where then mountain waves (one kind of gravity waves) are excited. The wave fronts are oriented parallel to the mountains and therefore in North-South direction. The flight pattern crosses the wave fronts on different altitudes several times to get a full picture of the wave. 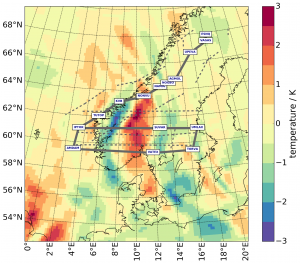 For the Falcon the way to southern Scandinavia is already quite far. Therefore Falcon can only fly one cross mountain leg and has to refuel then next to Stockholm. To get a picture simultaneous on different altitudes it was planned to fly with both planes on top of each other. Therefore Falcons take-off was planned half an hour before HALO. Before the take-off a general group picture with both planes was taken, which you can see below.

The whole Campaign Crew in front of both aircrafts and the Arena Artica. Picture by Sonja Gisinger, DLR. 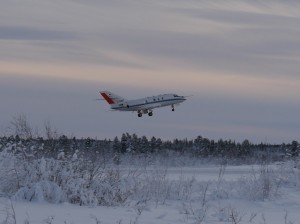 After the group picture Falcon took off as planned at 12:50 UTC. 5 minutes before take-off HALO switched off the turbines again and came back into the Hangar. The GLORIA instrument had serious problems. A short meeting of the mission PIs lead to the decision to delay the Take-off and give the GLORIA team the opportunity to solve the problem. Everybody immidiately got into action. The problem was located inside the spectrometer, but there was the hope to solve it with a new software installation. Unfortunately the new software could not be installed directly onto the current electrical control unit. Therefore the control unit was exchanged. Luckily that solved the problem and HALO could take off finally at 16:30 UTC. Falcon is waiting at the refueling airport for HALO to get one cross mountain leg together. We are now all waiting excited for very interesting data from this unique mountain wave case. 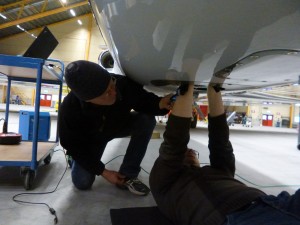 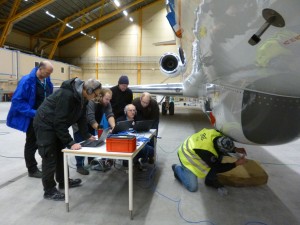 Checking if the solution works. Picture by Isabell Krisch, FZJ.