Usually there is one EMC test for each measurement campaign. This is to test if any instrument interferes with the aircraft electronics. We had our EMC test on Friday 26th of August (picture).

Last Friday we noticed that shortly after switching on the engines all instruments where shut down and the big question was: Why..? Around 25 years ago a safety feature was implemented to Geophysica. As soon as one engine fails (in theory during flight) all instruments are shut down automatically to provide as much power as possible to the aircraft for landing. Not on purpose, but exactly this was done during the first EMC test so that we repeated the test Monday morning, this time we were more successful.

The first real measurement flight was already yesterday. Geophysica and all instruments were already 30 minutes longer running in the sun than planed, so some instruments had problems with overheating. In general ,I believe, the atmosphere towards this first measurement flight is positive. Some groups collected some good data and are ready for the next flights, some are already happy to have measured data at all 😉 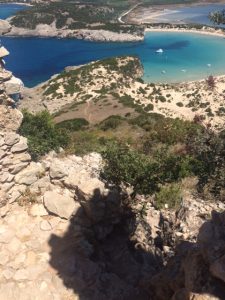 On Saturday almost all of us had a day off to explore the region around Kalamata a bit. 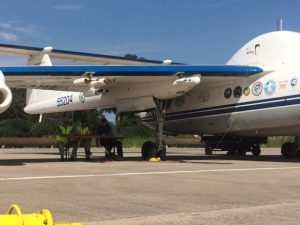 During the first EMC test.