We have been very lucky with the meteorologic conditions. Breaking Rossby waves from the jet stream sent a high pressure cut-off system from the mid-latitudes with a high-reaching tropopause north. This formed an interesting feature with high tropopause altitudes in the North Atlantic between Greenland and Norway. Being interested in what is going on at the border region between troposphere and stratosphere, we can easily fly through air in both layers probing in particular the border region in this situation. 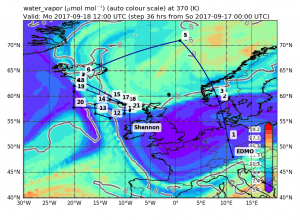 The picture shows the flight plan for HALO’s transfer flight on top of a map of water vapour concentration in the atmosphere. The maps are generated in the MSS flight planning tool illustrating the water vapour values predicted from the CLaMS model in the background. Both tools are developed at IEK-7, Forschungszentrum Jülich, and very important for a sophisticated flight planning. Water vapour is a tracer for tropospheric air, i.e. a high concentration indicates that the air comes from below the tropopause. (Copyright: Forschungszentrum Jülich)

The way up to high latitudes over the North Atlatic allowed the instruments to measure trace gases, e.g. water vapour, in different altitudes of the high-tropopause feature. The further flight track led HALO along the edge of the structure, to probe the border between tropospheric and stratospheric air, and get data from the mixing going on in this area. The hexagon in the end was located where the high-tropospheric structure disconnects from the jet. A tomographic retrieval from GLORIA measurements here will give a deeper insight into what happened at the jet exit.

According to forecasts, the probed structure will stay stable the next couple of days such that we can re-measure the same air masses in the upcoming flights. This can give an indication on how the meteorologic situation evolves in time and how it is further characterised. The next flight is planned for tomorrow, Wednesday, 20 September, and will be probing the cut-off again along the Norwegian coast.