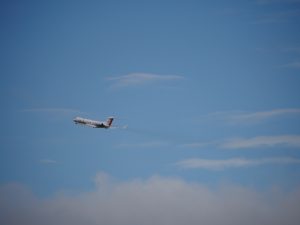 HALO taking off from Shannon Airport for the 9th research flight in the WISE campaign. (Picture by Cornelia Strube, Forschungszentrum Jülich)

As probably mentioned before somewhere in this blog, the name “HALO” stands for “High-Altitude and LOng-range”. Only the long-range aspect made our Saturday flight, almost all the way to Newfoundland, possible. In principle, HALO can fly for about 10 hours with the current scientific payload. This flight took approximately 9 hours. There, the instruments probed an air mass that is supposed to come from the Asian Monsoon area and is considered “young” so carrying tracers that left the surface recently (i.e. in the order of a couple of weeks).

Today, HALO left Shannon at 9:30 local time for the next flight. It just entered Norwegian airspace and will further zick-zack north along the coast in different altitudes. This gives us the chance to measure the same air mass, which we have probed on Saturday, now building a long tropospheric feature in the lower stratosphere above the North-Easthern Atlantic along a breaking Rossby wave. The different flight levels hopefully give a good chance to see mixing going on at the breaking wave front.

Forecasts tell us that the same air mass will continue to travel North close to Spitzbergen. So a next flight, which is probably taking place on Thursday, might follow the air again and probe it for a third time in another stage of mixing. We will see where the plans will carry us. Stay tuned. Cheerio!