Research aircrafts do not usually fly straight to a point and back, as you would expect for instance a passenger plane to go. Observing flight tracks of such a plane give very funny patterns, hence. See for yourself.

GLORIA is an airborne remote sensing instrument. So we are measuring air masses that are remote to the plane the instrument is mounted on. Sometimes, quite funny flight pattern are necessary to get the measurements that we want to see. For instance, we fly hexagons or rectangles to see an air mass in three dimension for the tomography. In today’s flight 13 of the WISE campaign, we fly a weird “partial pentagon” to encircle a small vortex of young, water-enriched air in the lower stratosphere above Iceland. 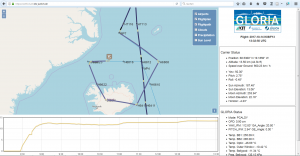 Pentagon pattern above Iceland to probe a tropospheric intrusion in the stratosphere as illustrated on GLORIA-WATCH. (https://zel613.zel.kfa-juelich.de/)

But also maneuver due to flight technical requirements can happen…. like in our last research flight. HALO had to fly this cute litte twist (or shamrock or bow or however you want to call it) in the flight 12 last Thursday for staying up in the UTLS until the very end of the flight. There we wanted to measure some high cirrus clouds with GLORIA.

Screenshot of landing flight pattern as illustrated on GLORIA-WATCH. (https://zel613.zel.kfa-juelich.de/)

So even if nothing might come out of our flights, we still have some nice modern art pieces that would be wrong in an exhibition…. let’s call it “Art and a research aircraft”. Cheers!