(Ex-)Hurricane Ophelia kept us busy the last days. IEK-7 campaign seem to attract natural catastrophies. Or is it that we are going wherever the weather is exceptional? No-one knows… However, we found ourselfs in the middle of national weather warnings from Sunday midday onwards. According to the NOAA Hurricane Center, Ophelia was the easternmost hurricane in the Northern Atlantic on record. Of course, being the dedicated climate researchers we are, we had to take the chance to probe the hurricane in front of our doorstep.

First forecasts showed Ophelia approaching Europe on Thursday last week. Ophelia was forecasted to come by the Spanish coast on Sunday afternoon. The plan was set very quickly to add another flight on Sunday afternoon next to the full 9,5h-hours flight on Saturday. The rather “short” flight, of about 7 hours, was fully aiming on the hurricane hunt.

Usually, flight planning is a rather long process (as already explained in more detail in previous posts in this blog). First requests of where to fly (altitudes and areas) have to be submitted days(!) in advance. So the administrative process had to go through the fast-lane when we started to plan this flight on Friday afternoon. On Saturday evening everything was settled to send HALO out on Sunday afternoon around 13:30 local time to fly down to the coast of Spain and measure the affects of the hurricane on different flight levels along the track the hurricane.

At the same time unfortunately, some military exercises were coordinated from Shannon airport, limiting our flight range significantly. So it was back to the drawing board on Sunday morning to shorten an already short flight, not to interfere with the military activities. Official waypoints for the flight hence only came back about the same time, we were ready to take-off. But eventually, HALO was on its way to meet Ophelia. With some spontaneous flight track adjustments in the air, HALO was even passing over the hurricane directly at about 16 p.m. 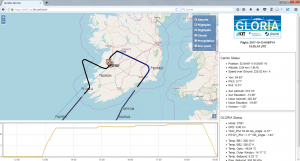 Also the pilots were happy with the flight apparently. Thumbs up! (Flight track of the 14th WISE flight as seen on GLORIA-WATCH, https://zel613.zel.kfa-juelich.de/)

But after the flight is before the data processing. So we are curious on what we can take out of this unique hurricane flight. Stay tuned. Cheers!