Driving off-road is a crucial part of this fieldtrip. We get the Land Cruisers for a reason and the people who drive have the chance to try out a number of different terrains, starting with basic dirt roads, ending with loose sand or gravel. For some of the drivers it`s the first time to leave the safe haven of asphalt and also the first time to handle a 2 ton four-wheel-drive. The fact that there have never been any major driving incidents shows that the off-roading is actually easily learned. Still, there are some tracks that are somewhat tricky.

On Tuesday morning we leave the camp at Coleman`s Rock and head towards one of the most difficult ‘roads’ you can drive here. It is an extremely steep mountain pass, covered in loose gravel – not a real problem for the cars but the drivers need some nerve, especially when there is oncoming traffic. We are thrilled as we make our way towards the mountain top and towards the end of the paved road, but then, disappointment. One of the cars is not switching into low-4-mode. Furthermore it`s 8° and cloudy, rain is likely and our mountain crossing cancelled. 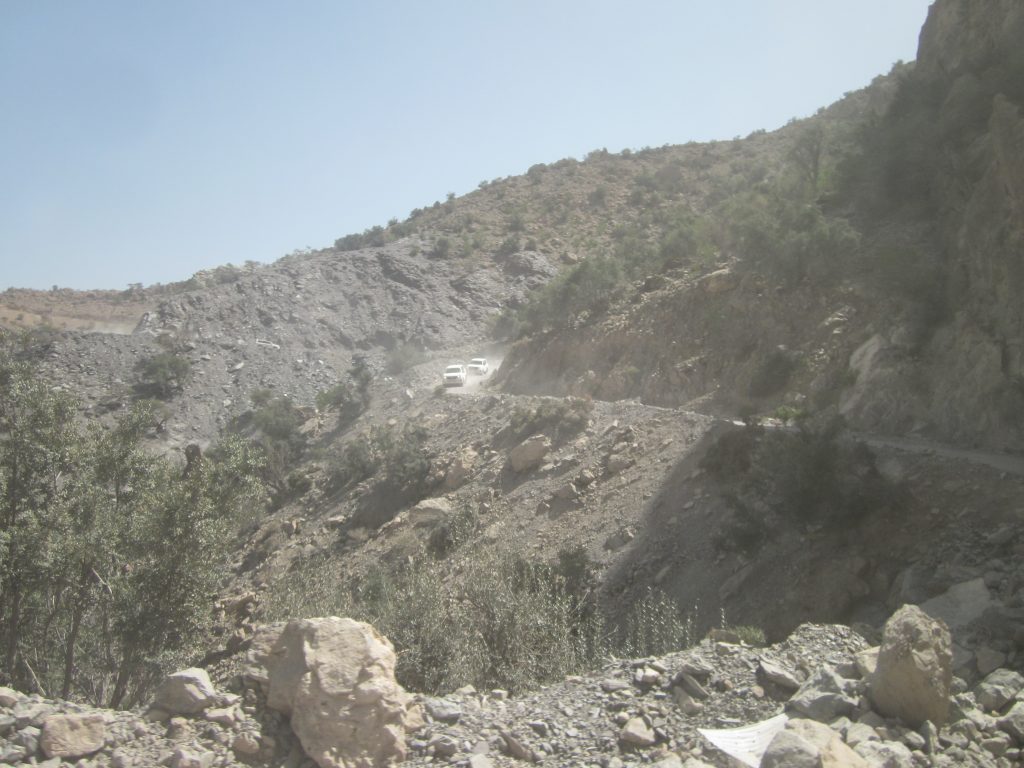 Nerves, huh? Thank God there was little traffic on the narrow winding road this morning (photo by Annika Fehres during the excursion 2018).

It takes much longer to go around, but in the end we arrive in Wadi Bani Kharous and get to travel back in time further than we ever did on this trip. At first glance the outcrop doesn`t look very spectacular. A very poorly sorted conglomerate overlain by carbonates. But when you realise that this conglomerate stems from the Precambrian 600 Million years ago and furthermore is a diamictite, so a sediment that was deposited by glaciers, it gets more interesting. For the students who know plate tectonics it seems obvious: Oman must have been located closer to one of the poles when this sediment was formed. Problem is: it wasn`t. This conglomerate is the result of the complete glaciation of planet Earth in the Precambrian, called snowball Earth. 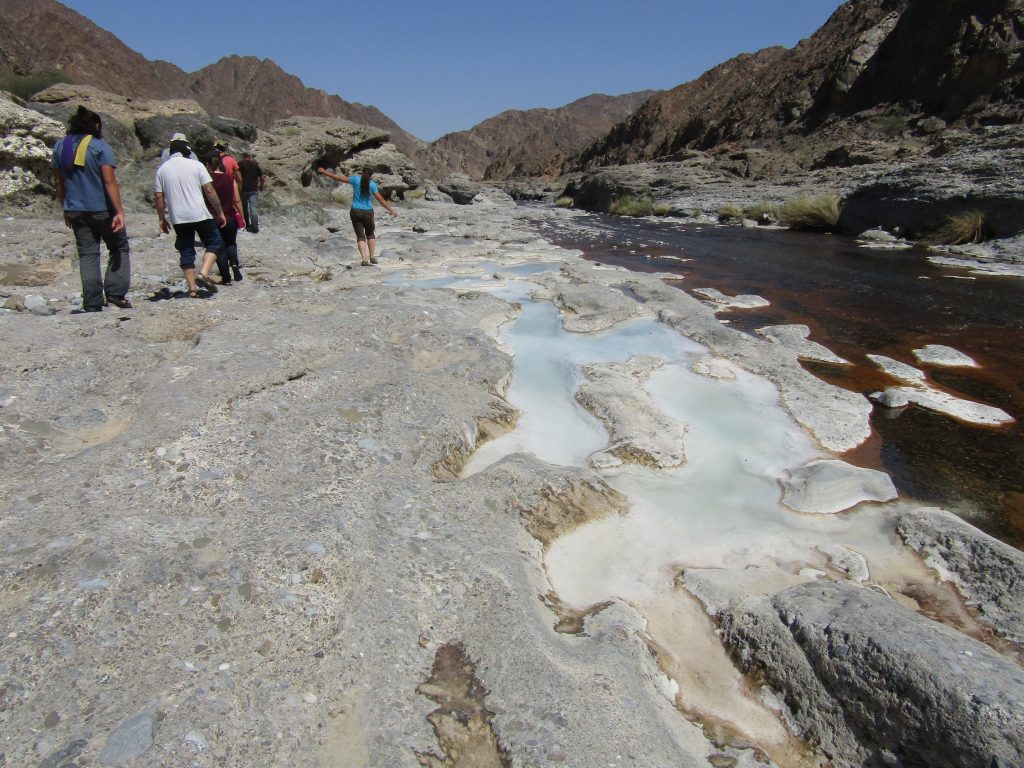 On Wednesday, for the first time since we got here, we don`t drive anywhere. Instead we start on foot and hike through Wadi Al Abyad. The reason why it`s called ‘the white wadi’ (‘abyad’ = white in Arabic) can be discovered shortly after we leave the camp. Wadi Al Abyad carries water year round and this water is mostly runoff from its catchment area. Additionally, there are hot springs in the valley. The spring-water has a pH of over 11 and is oversaturated with CO2, once it mixes with the surface water, with a pH of 7, calcium carbonate is precipitated, a lot of calcium carbonate. This precipitation leads to white water pools that give Wadi Al Abyad its name. They also lead to the natural cementation of the river gravel to form a hard rock. 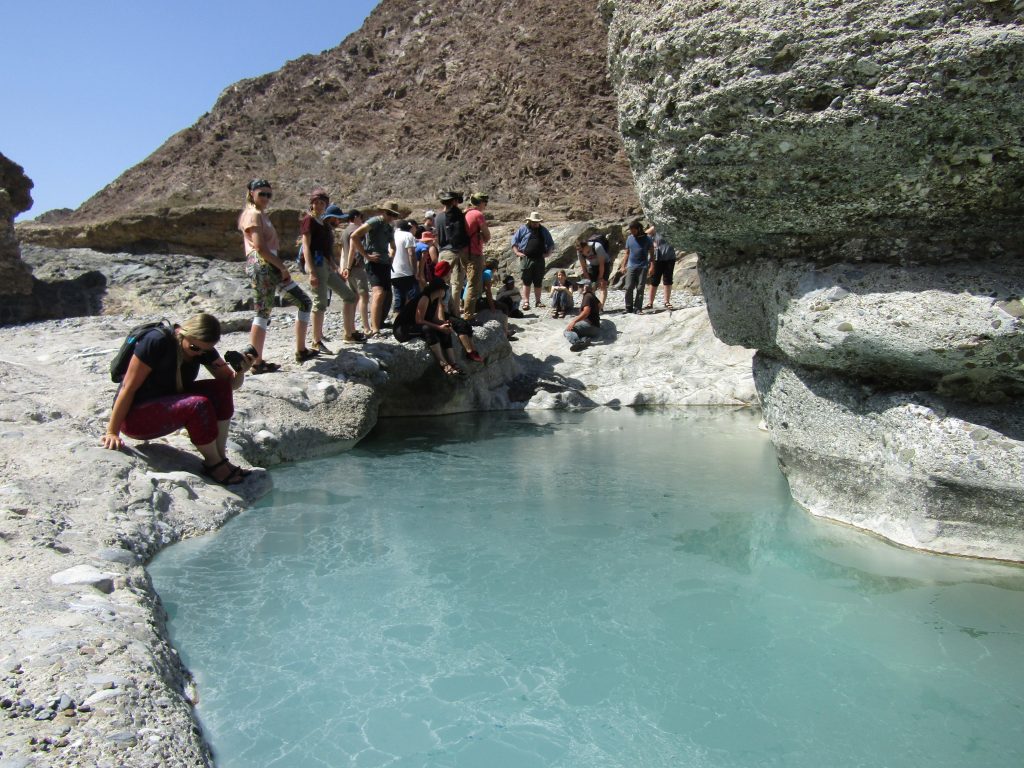 The white wadi gets its name from carbonate precipitation. © Michaela Falkenroth

The spring water here has a temperature of 40° C. © Michaela Falkenroth

While this whole spectacle is fascinating and beautiful – it is not the reason why we are here. We`re here to accomplish what no drilling project has ever done: reach the Mohorovicic discontinuity (short: Moho). The wadi cuts through the famous ophiolite sequence. As mentioned before, the ophiolite consists of mantle rocks and oceanic crust, in between the two lies a transition zone, called Moho. We begin our hike in the Earth`s mantle and wander towards the crust. The ophiolite sequence of Oman is not only the largest but also the best preserved and in the end we get to do everything that we ever wanted to do on the Moho. 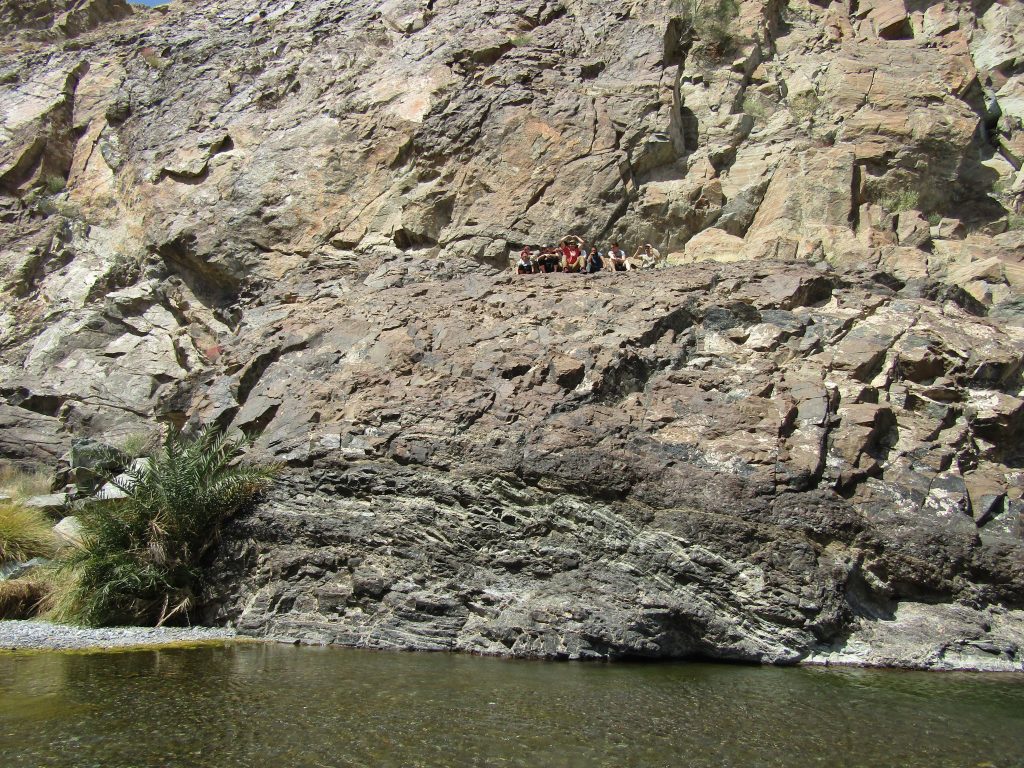 Want to jump over the Moho from the Earth`s mantle into the crust? In Oman it`s possible. © Michaela Falkenroth

Thanks to Memo, we now know that the Moho (and others) is rock-hard no matter where you touch it and ehm… I think I should end it here.