Besides the SC17 conference logo, tag line and preview video, which were introduced at past year’s conference, we (that means my communication team 😉 ) is also producing a series of short videos around the “#HPC connects” conference tag line. They will showcase five large science projects which are “connecting people, systems, and science”. Once produced, the videos will be published at the SC Youtube channel and of course will also be shown at the conference in November.

Yesterday, a film team visited Forschungszentrum Jülich, to shoot material for one of the five videos which will feature the Human Brain Project. This is a prime example of “#HPC connects”: the international project brings together scientists from 117 institutions from all over Europe. Scientists from Neuro-science, computer science, medicine, robotics, mathematics, ethics and many more are creating and operating a European scientific Research Infrastructure for brain research, cognitive neuroscience, and other brain-inspired sciences, simulate the brain, and will build multi-scale scaffold theory and models for the brain. This requires connecting large-scale computers with large storage and data analytics systems and visualization systems.

I took the opportunity and followed the team all day long taking some pictures for you along the way. Besides interviewing key scientists of the projects for the video, the film team also took some shots of our supercomputers and of some laboratory assistants in white coats — I guess there is an unwritten rule somewhere which says that this is the way to depict science 😉 However, I was quite impressed by the effort necessary just to get a few seconds of nice video.

The shooting started in our supercomputer machine hall: 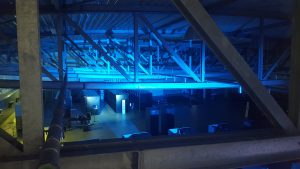 To create the right atmosphere and lighting, the machine hall was flooded with blue light — Picture by Bernd Mohr 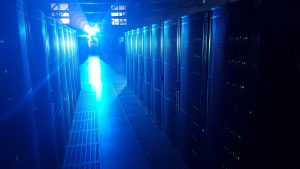 View down an aisle of the JURECA cluster. The final video will show a tracking shot, i.e. the camera moves through the aisle — Picture by Bernd Mohr

Next was the neuro-science laboratory: 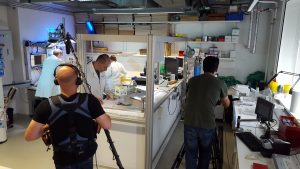 The film crew in a typical(?) laboratory environment — when you see the scene like this, it is hard to imagine that this will look nice or interesting in the video — Picture by Bernd Mohr 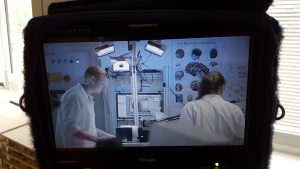 BUT, this is how it will look like in the final video (captured from the control monitor of the producer) — much nicer, isn’t it? — Picture by Bernd Mohr 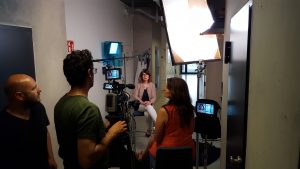 Shooting the interview with Prof. Katrin Amunts in the hallway – couldn’t they find a better location? — Bernd Mohr 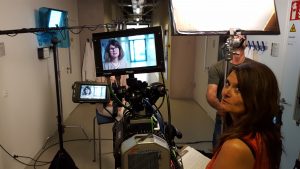 But again, looking through the camera it does not look like a hallway at all 😉 — Picture by Bernd Mohr

It was very interesting to see the difference between how and where a scene was shot and the video sequence which resulted from it. As you can see from the two examples above, the actual location was quite ordinary and boring, but with the right lighting and selecting the right viewpoint and clipping, the results looked amazing. The film crew certainly knew what they were doing. By the way, the lady in the red dress in Jennifer Boyd who we hired as producer and director of the #HPC connects video series. People reading this blog regularly will remember that she already produced our amazing SC17 preview video.

The day ended with producing of the “hero shot” or Prof. Dirk Pleiter. The hero shot is used in the video to introduce a person. Watching it was actually quite funny, but I guess it was kind of stressful for the crew: It starts with Dirk standing and looking sidewards. While the camera moves towards him, Dirk has to turn to the camera, fold his arms, and look straight into the camera. At the same time, a scientific animation was shown in the background on the display wall. What made the shot so tricky, was to synchronize these four movements: moving the camera, Dirk turning, Dirk folding his arms, and the scientific animation in the background. 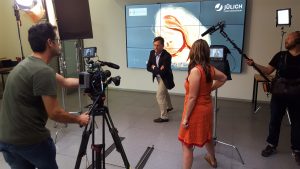 I think the film crew got some funny “outtakes” in the process but we will not show them here in fairness to Dirk. You will have to wait for the publication of the final video to see the result. For my part, I can wait to see the final clip!

Bernd Mohr is a scientist at the Jülich Supercomputing Centre (JSC) of Forschungszentrum Jülich. He is also deputy head of the JSC division "Application Support". His research centers on Supercomputing in general and especially on performance tools for parallel programming for almost 30 years now.