A glimpse inside the biggest project of the DocTeam

Being a doctoral researcher is more than just doing science, working in a lab or programming simulations! Being a (young) scientist means also to be able to communicate with other scientist, publish as many of your results as possible in scientific journals, make yourself a name within the scientific community and deepen your knowledge about special methods used in your field of research! But these skills are usually only taught partly at university during your study program. Especially, how to write a scientific paper in English is something, a student does not always learn during his/her studies in Germany. Therefore, so called graduate schools are established, which offer courses in different areas and provide doctoral researchers with transferable and methodological skills.

In the research center Jülich, two graduate schools already exist, namely HITEC (Helmholtz Interdisciplinary Doctoral Training in Energy and Climate Research, ca. 150 Docs) and IHRS BioSoft (International Helmholtz Research School of Biophysics and Soft Matter, ca. 40 Docs). However, these two graduate schools only cover the doctoral researchers of some institutes of the FZJ. In order to offer the same opportunities and advantages to all young scientists, several departments of the research center work together on a large project, called Doctoral Researchers’ Platform – short DocPlatform. One, or maybe the most important point of the development process is, to build the platform up on best-practice-examples from every field that already exist within the institutes of the FZJ and not reinvent the wheel again so that all doctoral researchers and supervisors can profit. 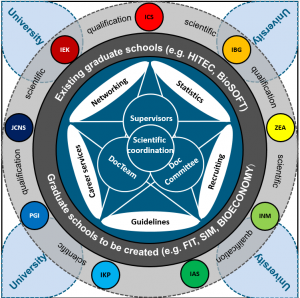 The scheme on the left shows how the single stakeholders, e.g. doctoral committee, the DocTeam and supervisors, as well as the graduate schools HITEC and BioSoft and the single institutes that will be combined and connected within the DocPlatform. The focus lies on a high quality education of young scientists. Thereby involved are the doctoral researchers of course, represented by the DocTeam, as well as the supervisors, that can be postdocs, group leaders, (junior) professors or the head of the institute, and the doctoral committee consisting of some professors, people from the Human Resource department, the corporate development and representatives of the DocTeam. These three groups are connected by scientific coordination, which shall ensure an excellent supervision and scientific education for every doc from the first day in Jülich to the last.

As mentioned before, all these goals are implemented by using the already existing methods and experience of the graduate schools and institutes to bundle the interests and concerns of doctoral researchers. In order to achieve this, the entire development process is divided into project phases and sub-working groups, which deal only with special aspects, respectively. Since the DocPlatform shall improve the situation of doctoral researchers, the DocTeam sends some volunteers to the single working groups in order to introduce the perspective of the current docs.

Right now, the development is still in the early stage, in which the single working groups meet for the first time and start investigating the situation and working on the pre-defined milestones. However, nothing is written in stone, yet!
The single work packages in the first phase are divided as follows:

Probably you can imagine how much work it is to develop such a concept and take into account all the different perspectives, wishes and claims. However, till end of April the first stage should be done and all the acquired results will be presented in order to define target processes and start with the second stage.

At the end of this entire project, every institute of the research center Jülich will be a part of the DocPlatform and the interface to the partner universities, at which the doctoral researchers have to defend their thesis, are well defined.

For us, as DocTeam, this project is a big chance to make a difference for the better and since a lot of us are involved in one of these working groups you will find more detailed reports about our work in this blog soon.

3 Responses to “Development of the DocPlatform”