The day has come. In dribs and drabs our newly minted Oman-travellers arrived at the hotel in Muscat. A hotel that conveniently changed its name and 1/4th of its facade over the last couple of months, but otherwise, from staff to breakfast, remained exactly the same. From the standpoint of the arrivals, something else probably changed its facade over the last 24 hours and that is Oman itself. The country went from a blank shape on a map to a real place with character, colours, sounds and smells.

The ABC/J group learns about urban development at the viewpoint above Wadi al Kabir. © Michaela Falkenroth

When you ask the typical European how they would describe their first impression of Oman, the answer will with high probability be something like: “colder than expected”. This popular notion is rooted in the successful attempt of the desert state to cool down its every building, including the airport, to a cosy 15° C. After you have unearthed that one pullover you brought ‘just in case’ from your bag, you will make your way over polished marble floors through an atmosphere that smells a lot like an exploded Douglas-store, towards the glass sliding doors, that spit you out into the hot and humid Muscat-mess.

I have no detailed information on how exactly our group spent their arrival day; the word ‘hotel pool’ somehow comes to mind. I do know however, that the willingness to drive one of the six Landcruisers has dwindled since we last asked, back in Germany. I`m gonna go out on a limb here and presume this has something to do with the taxi ride to the hotel. Yes, I`ll admit it, letting go of the concept of traffic rules is hard at first, but I promise, once you become used to ‘right of way has whoever goes first and weighs the most’, driving in Muscat is a piece of cake.

Actually there is a reason for Muscat’s hectic traffic and the whole situation is worth considering, when you want to learn something about the urban development of the capital. It is no secret that Sultan Qaboos`s politics and the oil-wealth have catapulted Oman from the middle ages to a modern welfare state within decades. Muscat is growing, fast, and with its growth the mountains in its back, which were once valued as natural rampart, are now hindering it to spread further inland. Instead the city stretches out sideways along the coast as a decentralised monstrosity (or scrambled egg, depending on who you ask). 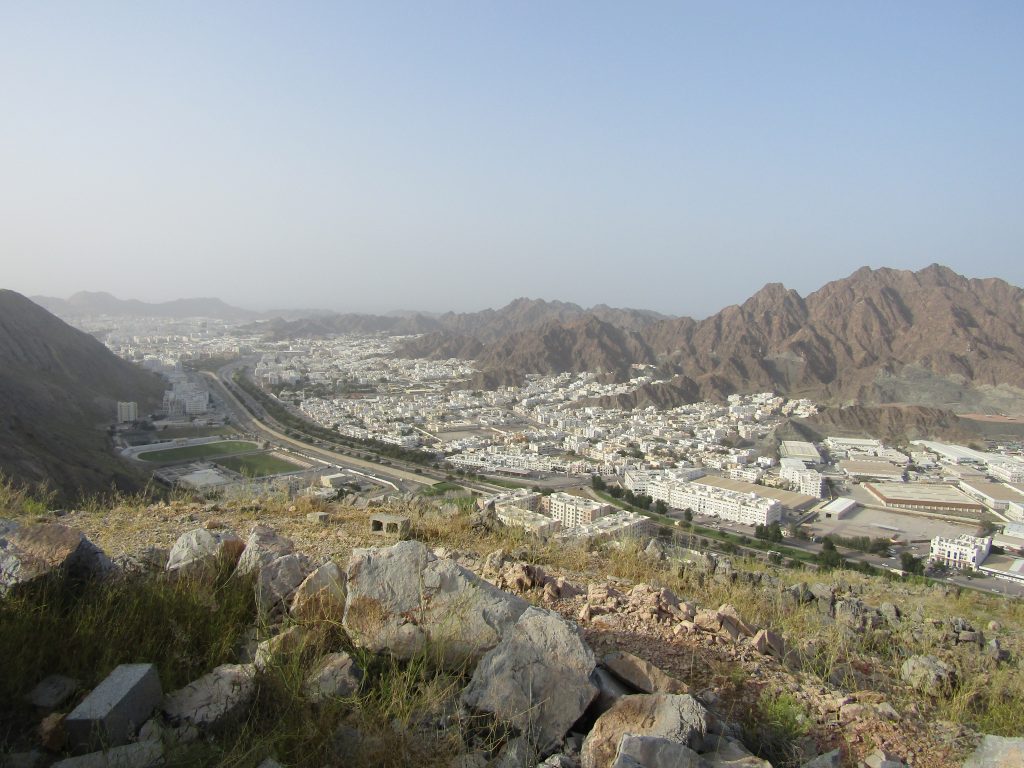 Muscat is sqeezed between the ophiolite and triassic dolomites in Wadi al Kabir. © Michaela Falkenroth

Transport infrastructure has to keep up, resulting in seemingly endless coast parallel highways. (The endlessness of the Muscat Express Way becomes very clear once you drove on it for 80 km and still haven`t left Muscat – ask the students, they did it today.) Since there is no form of public transportation and fuel is cheap, the average Muscat citizen spends hours on these highways every day on their commute to work but also for every other need. Suddenly the scary traffic is just a puzzle piece in a bigger picture. This insight really hits you when you stand high above Wadi al Kabir at the viewpoint and look down on Muscat`s white buildings, squeezed into the valley between ophiolite and Triassic dolomites.

From the viewpoint above Wadi al Kabir, the problems that modern Oman faces seem almost insoluble. But there is a reason to not give up hope quite yet and that reason is, as often, the young generation. It is not like Oman is unaware of its out of control capital. At the latest in 2007, when tropical cyclone Gonu washed away this coast-parallel infrastructure in one giant flash flood, it became clear that the current situation is far from a sustainable one. The answer is a well educated youth that slowly but surely wraps its mind around the concept of sustainability. 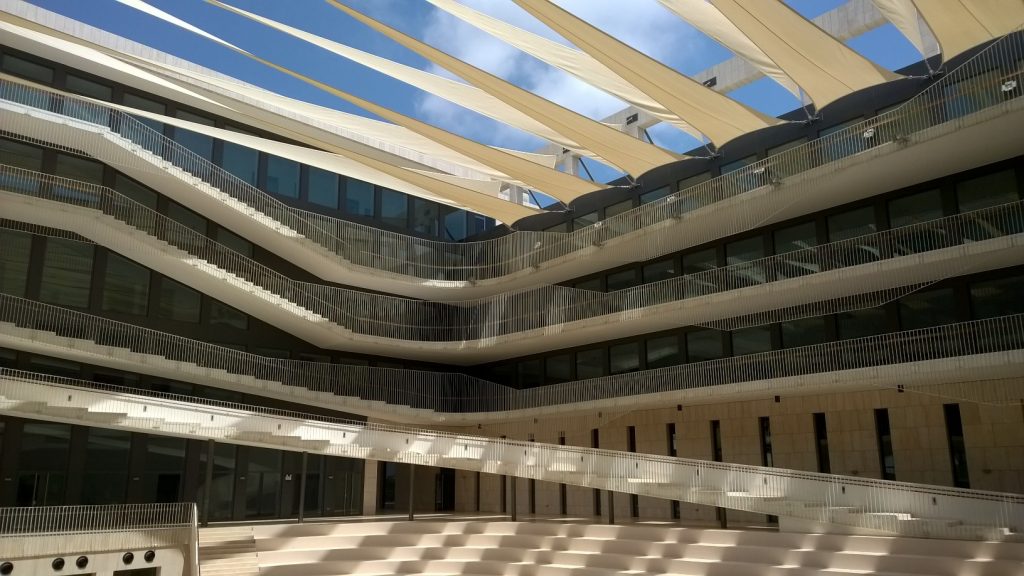 In the morning the group visited one of Oman`s educational hubs: The German University of Technology in Oman, short GUtech, where a whole urban planning department works towards the future right now. From this investment in education we moved on to an investment in natural preservation, the Oman Botanical Gardens – a project initiated by his majesty Sultan Qaboos himself. 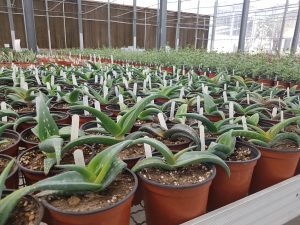 Green shoots for the botanical gardens and for a more sustainable mindset. © Michaela Falkenroth

For now, the gardens are still under construction. A team of researchers and landscape architects carefully collects the 1,400 different plant species that occur in Oman, catalogues them and plants thousands of trees and shrubs that will one day fill a prestigious compound, where the visitor can stroll through all the different environments that Oman has to offer. When thinking about the Arabian Peninsula, for many people all that comes to mind are sand dunes. For us this image is forever branded as false, now that we saw the lush, foggy, green monsoon forests of the Dhofar region. Most of the energy consumption of the botanical gardens comes from solar panels by the way, not from oil, which makes it very hard to contain a loud ‘finally!’. Without doubt this project has struck roots and with it the thought of preservation in the heads of the people. You see: Muscat is not only a feverish mess but also a breeding ground of ideas – don`t give up on it just now! 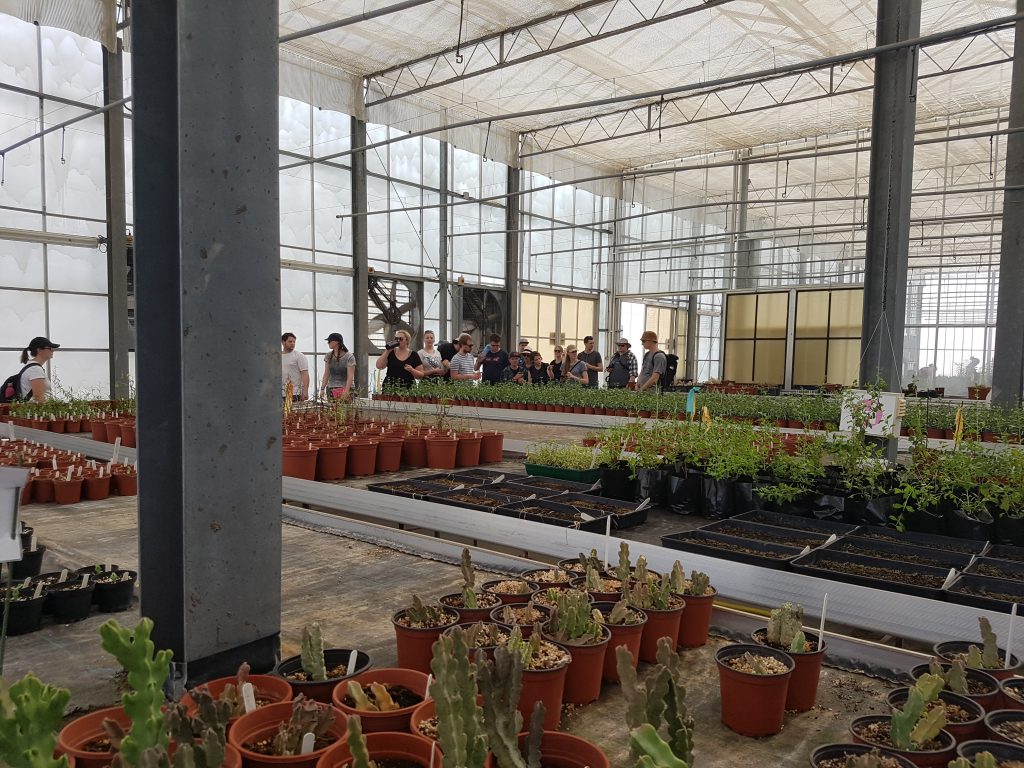 In the greenhouses the group learns about the variability of Oman`s flora. © Michaela Falkenroth

Even without giving up on Muscat, we are for sure leaving it behind, because at the end of the day the Omani wilderness calls. For the night we settle down at As Sifah Beach, fresh tuna is sizzling on the campfire, while the mosquitoes already begin their feast. They might drink our blood, but they are not damping the spirit, because this fieldtrip is of to a great start and with this we say: