Today we spend the whole day on a terrace. I know what kind of image this sentence probably triggers: armchairs, cold cobblers, homemade lemonade, sunglasses and general relaxation. Forget that! The terrace we are talking about is a marine terrace, so a staircase-shaped coastal landform that is formed through a combination of sea-level variations and land uplift.

The beach camp in Fins, where we put up our tents yesterday, offers not only a spectacular ocean view, but also an, arguably even more spectacular, mountain view on its landward side. The up to 2,000 m high Selma Plateau we see there is part of the Hajar Mountains (see last post) and consists mostly of Eocene and Miocene limestones. On a roughly 70 km wide coastal strip between Quriyat and Qalhat at least 9 marine terraces are cut into the limestone bedrock. These terraces have not only been subject of a large, DFG (Deutsche Forschungsgemeinschaft) and TRC (The Research Council, Sultanate of Oman) funded, research project, lead by Gösta, but are also of importance to Kim and my PhD projects, so today we took the group out to collect the fruits of over five years of research. 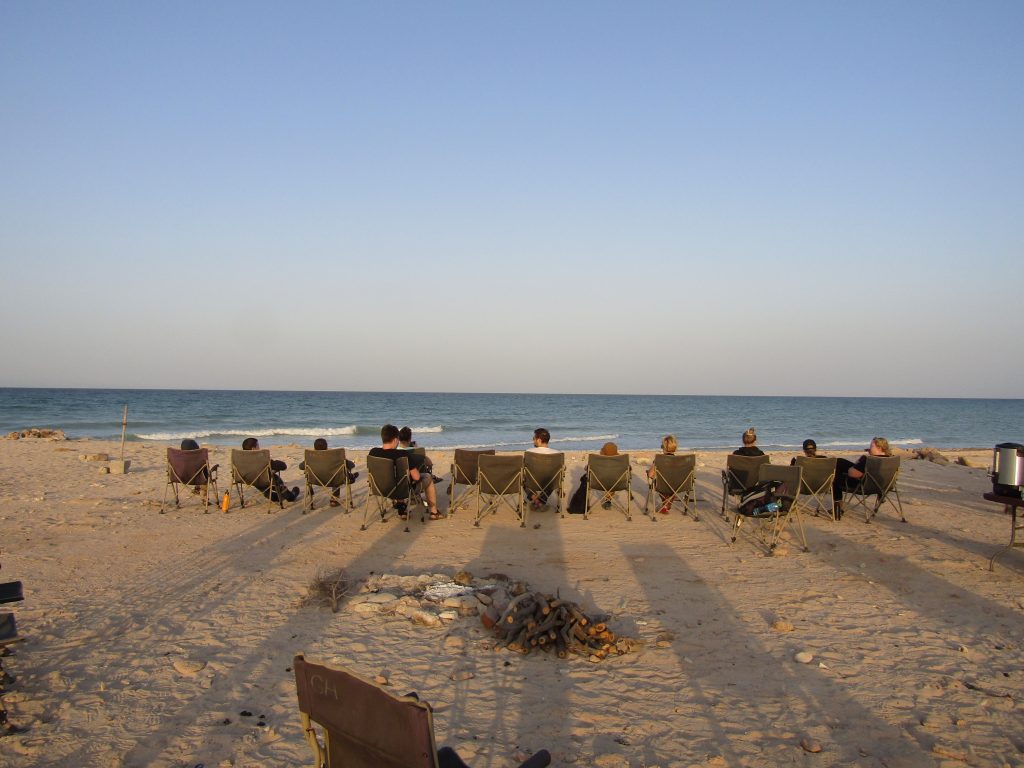 You can`t help but notice a clear ocean-view-preferance dispite of the fascinating mountains. © Michaela Falkenroth

As often in Oman, our research interests overlap suspiciously with popular tourist attractions (pure coincidence I swear). Part of the reason why the coast around Fins is uplifting and the terraces are formed is that the limestones in the area are heavily karstified. Karstification is the process of carbonate rocks being dissolved by water. Here, this process hollowed the mountains and created gigantic caves like the Majlis al Jinn (‘living room of ghosts’), which is large enough to comfortably host the Cologne Cathedral inside. Apparently ghosts need a lot of space. They are also to anger easily, which is why Oman prefers to build impossibly steep highways over the mountains instead of tunnels – no kidding. 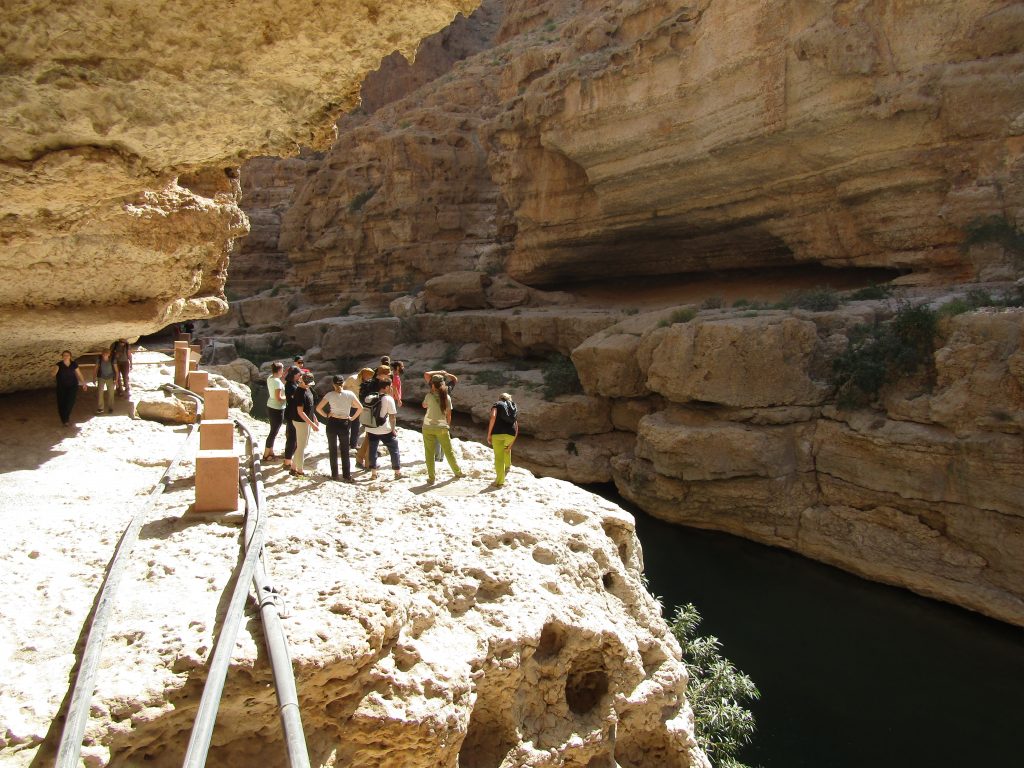 Reaching the entry to the cave sadly requires some serious off-roading in the mountains (serious meaning potentially-life-threatening) so that`s off the list. However, the open parts of the karst system are easy to reach. As you see, on top of the science we have a very good reason to hike through famous Wadi Shab and swim in its crystal clear waters. It`s not our fault that geology in Oman is ridiculously pretty. On our way down the wadi we learn about the country`s ancient agriculture in hanging gardens, how a special banana-plant from Shab saved the entire species from extinction and how little some tourists know about dressing appropriately in an Arabian country (wear pants – duh!). 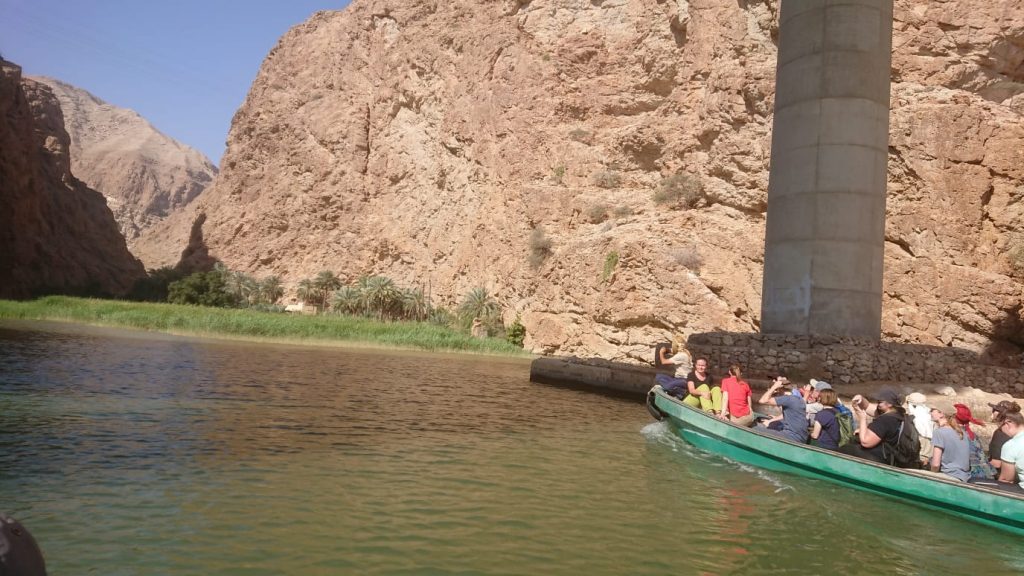 Wadi Shab is one of the few wadis that maintain a freshwater flow year round. © Valeska Decker 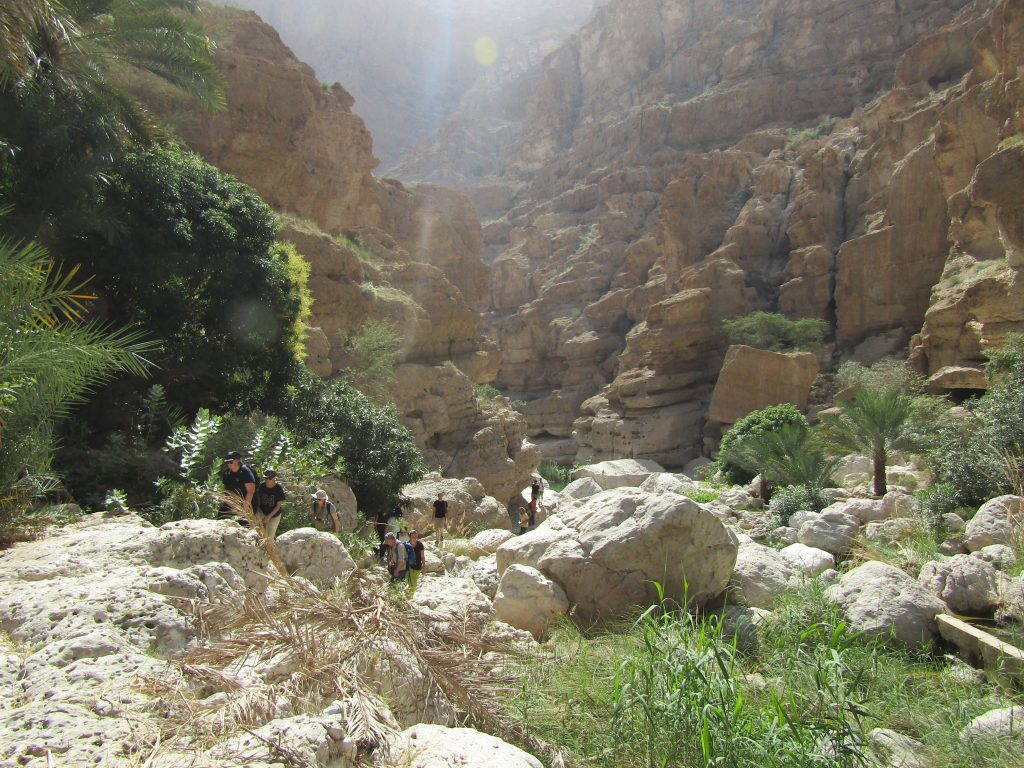 Dates, bananas and mangoes grow in the gardens of Wadi Shab. © Michaela Falkenroth 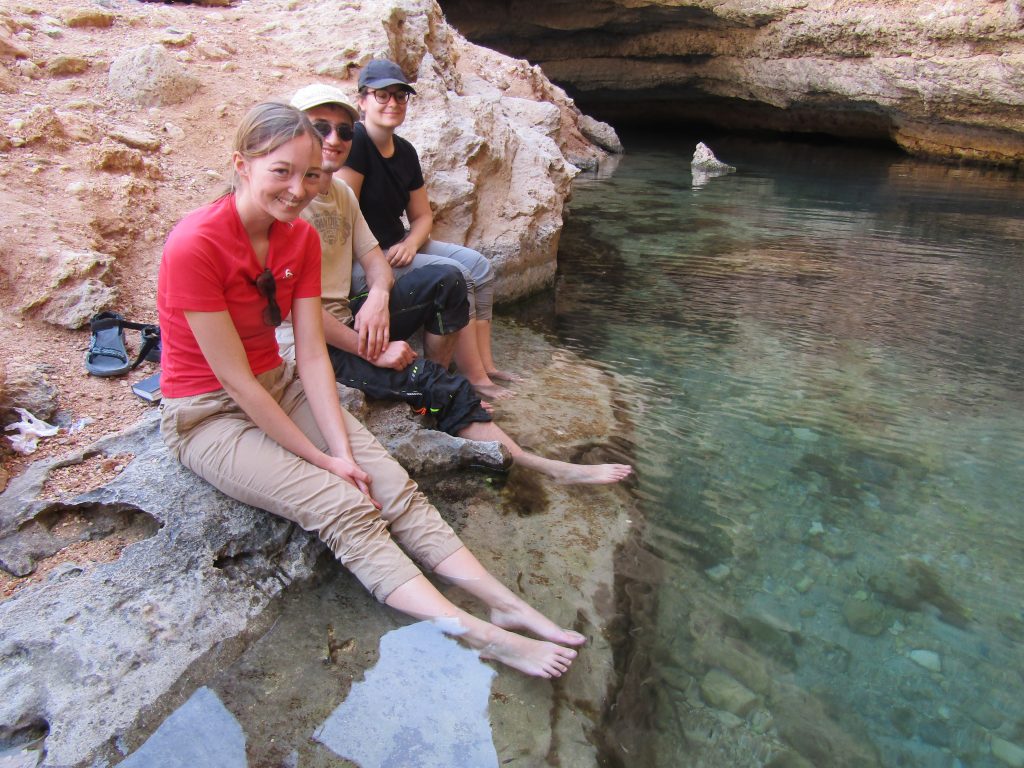 There’s got to be time … .© Michaela Falkenroth

After we semi successfully defended our lunch against a horde of hungry goats, we leave Wadi Shab behind and turn to the remaining geological attractions of the area. Near Tiwi a 6 m high cliff shows alternating cycles of coral reef growth and terrestrial debris flows, that are most likely last interglacial in age. In Bimmah we look down the ‘Hawijat Najm’, a sinkhole that is falsely named ‘the deep well of the (falling) star’ – to be fair ‘falling star’ sounds much better than ‘collapsing cave’, the latter might also create a little unrest in potential visitors. Last but not least we learn about the ancient paleo beaches that are found high up in the mountains due to the uplift of the area. 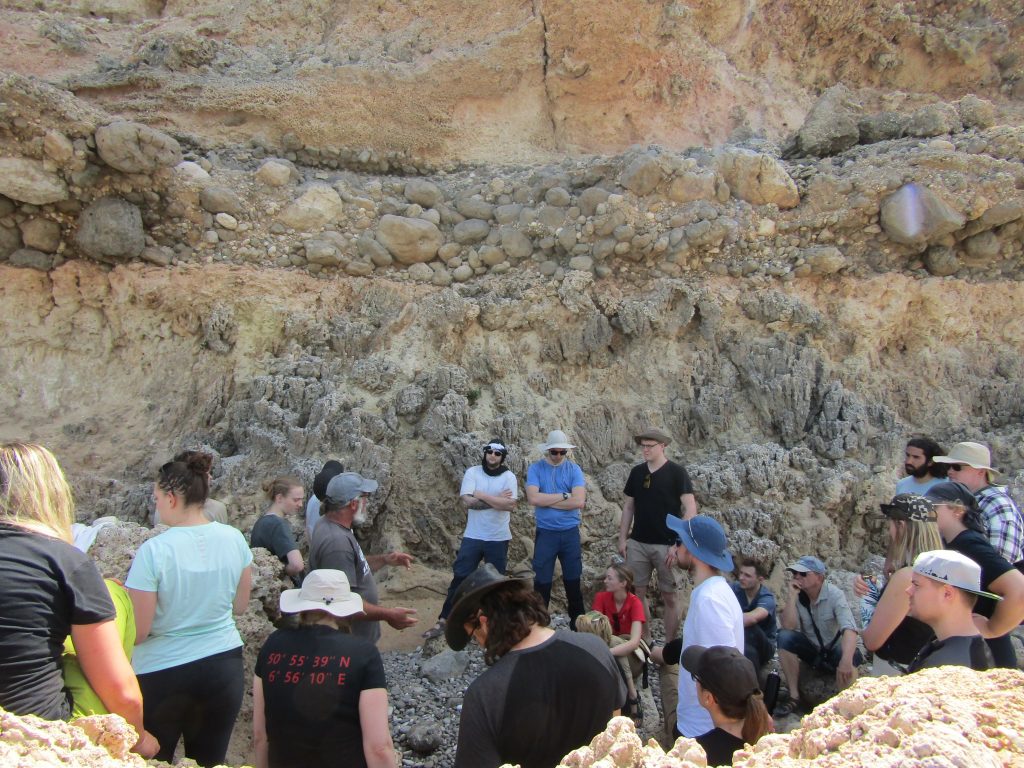 The corals in this last interglacial reef were under stress from hightened sediment entry. © Michaela Falkenroth 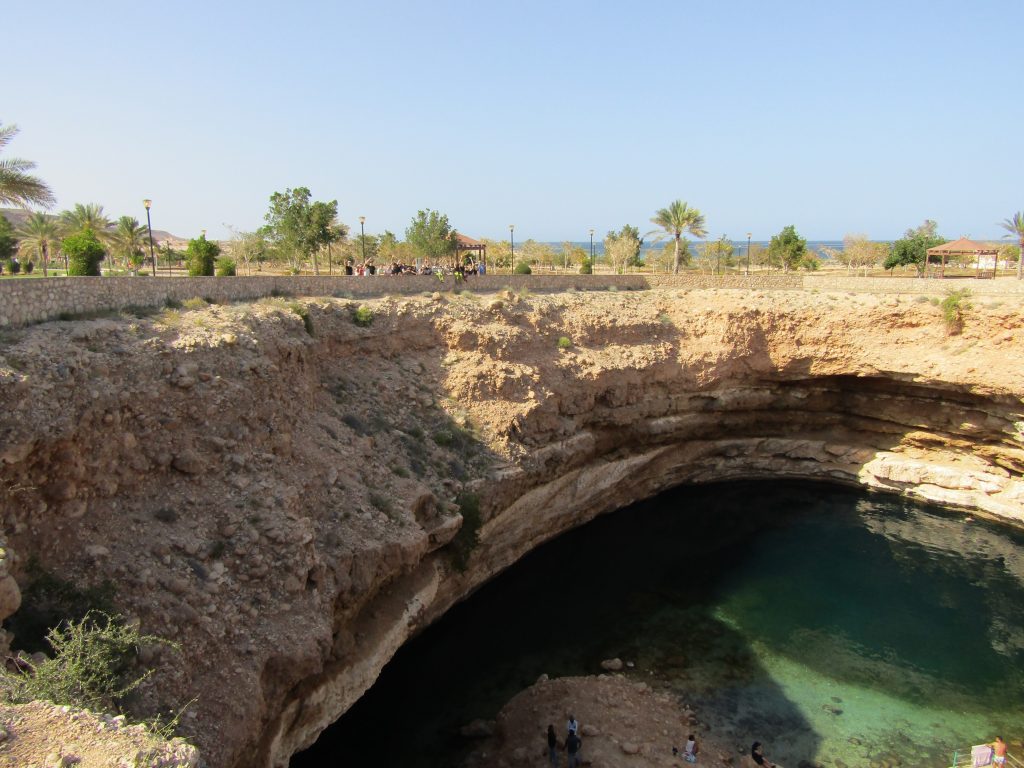 As we return to our beach camp near Fins the sun is already setting and camels are roaming around. In an ironic twist of events a goat was less successful in defending itself than we were at defending our lunch and we enjoy it spicy with rice. Time to gather round the campfire!