In June several colleagues of our institute visited the 25th Annual Meeting of the Organization for Human Brain Mapping (OHBM) in Rome. The aim of this international organization is to improve the understanding of the brain’s anatomical and functional organization by means of neuroimaging. Here, researchers from different domains like MRI, fMRI, PET, EEG/MEG and other cutting edge approaches such as electrophysiology, preclinical imaging, neuroepidemiology and genetics come together to present their research findings or methods by means of symposia, keynote lectures or posters. Moreover, especially for PhD students, educational courses and a hackathon are provided to promote education in human brain organization. With by now more than 4000 attendees, this conference belongs to one of the biggest ones in its field.

In total, 24 colleagues of our institute INM-7 participated in the conference. For me, it was the first time. Although I’ve already heard a lot about it before, I was still very impressed! As the conference started on Sunday morning, we arrived in Rome already on Saturday and spent a nice evening in the city with a bit of sightseeing and some Italian food. Sunday morning started with educational courses with one of them dealing with Brain Parcellations and Functional Territories which was introduced by the talk “From Post-mortem to in Vivo Parcellations” by Dr. Sarah Genon from our institute. Although it was very warm and crowded in the lecture hall, it did not stop the visitors from following the presentation spellbound. 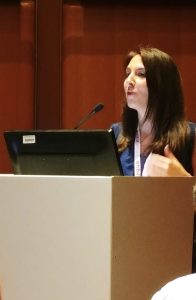 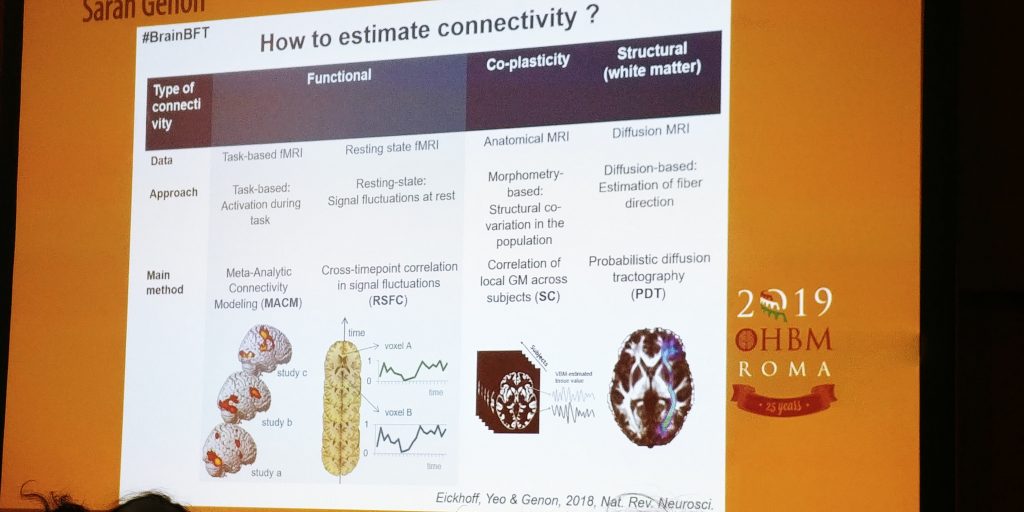 However, the conference actually only begins Sunday evening with an impressive opening ceremony, at which next to the obligatory welcome speeches and an award ceremony there is also a Talairach Lecture (this year held by Prof. Riitta Hari). As we were in Rome in the Auditorium Parco della Musica, where concerts are held regularly, the conference opened with a medley performance of the most famous Italian songs (like “Volare” or “That’s amore”) by four opera singers. The complete opening was absolutely captivating and the common spirit that unites all neuroscientists was almost tangible. 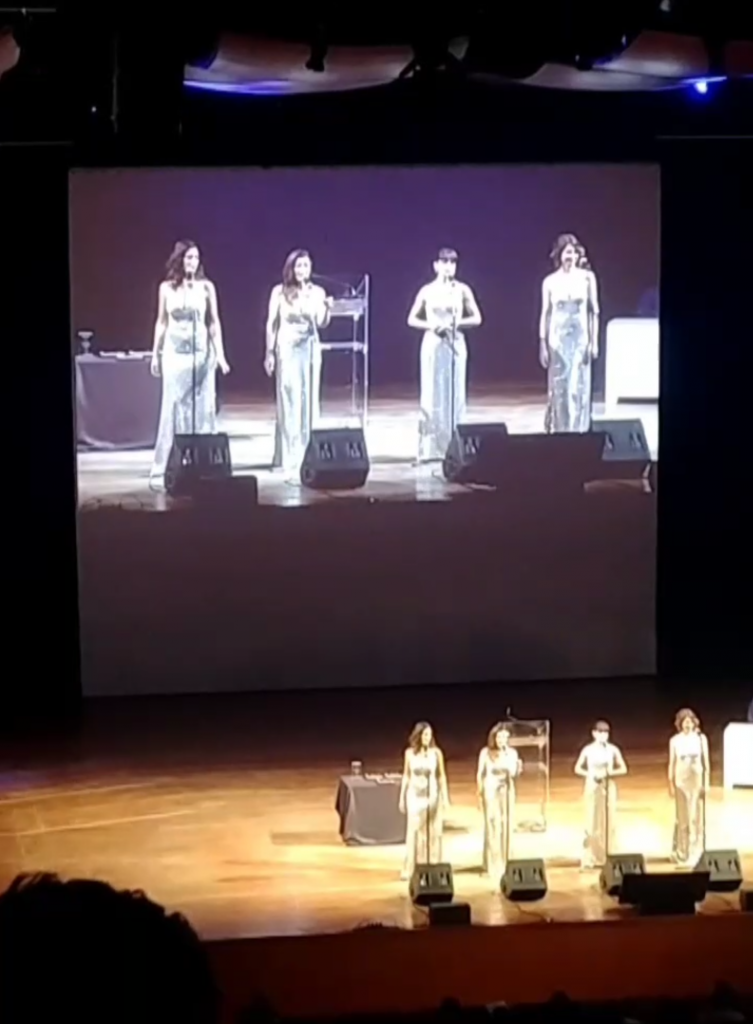 Following this impressive introduction, everyone was cordially invited to enjoy drinks and snacks in the tranquil courtyard of the auditorium and in the magnificent hanging gardens. The whole scenery was very lovingly designed and the reference to Italian culture was integrated appealingly. Typical Italian food (from tomato mozzarella, over pasta and arancini, to ice cream) was offered in pretty food trucks and at buffets. Moreover, we were entertained by traditional dancers and jugglers. This environment invited to meet old acquaintances again and to make new contacts. Although it was my first participation, I could directly notice that such celebrations and meetings are an absolute basis for scientific cooperation. 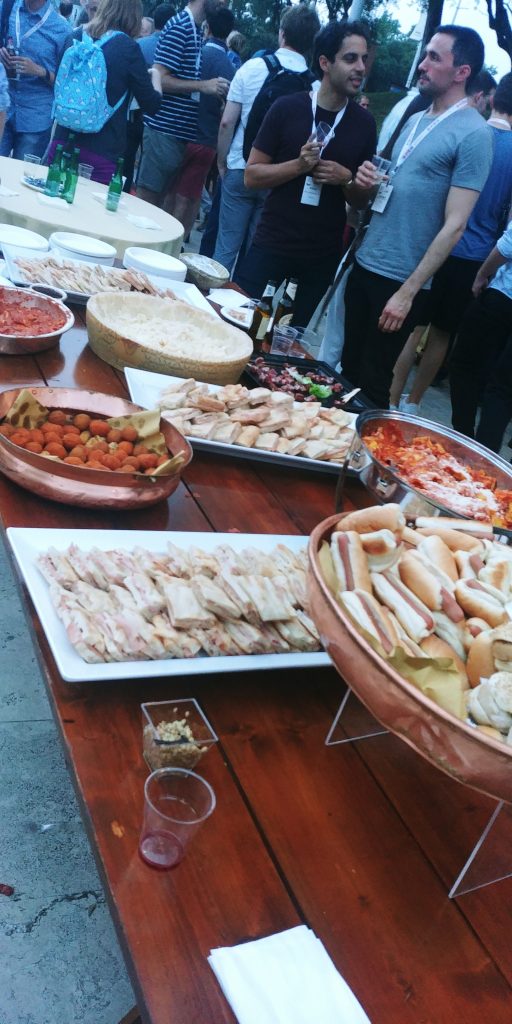 The following days were planned in such a way that there were four thematically different morning symposia in parallel, followed by a keynote lecture. Before lunch break, there were four different oral sessions in parallel. Afterwards, the posters were presented, followed by the afternoon symposia and a second keynote lecture. Finally, the scientific part of the day could be concluded with the poster reception.

Thematically all symposia sounded really interesting and the quality of the scientific presentations was consistently very impressive, which made it difficult to choose from the range on offer when sessions run in parallel. Often, people only attended a certain talk of a symposium and left afterward to attend a talk of another symposium in order to gather as much information that was of particular interest to them as possible. Since the daily agenda was very tight, it required some planning to select and schedule activities individually to one’s needs. On top of that, social events took place every evening. Either a private dinner was arranged with some colleagues or one visited the organized student party or the club night. To me, this part of the day was of special importance to do social networking. Therefore, one thing is for sure: you won’t get much sleep. Even if it may be a bit exhausting from time to time, you try to absorb as much as possible of this unique experience. You are willing to put up with a little fatigue because missing something would be a shame. 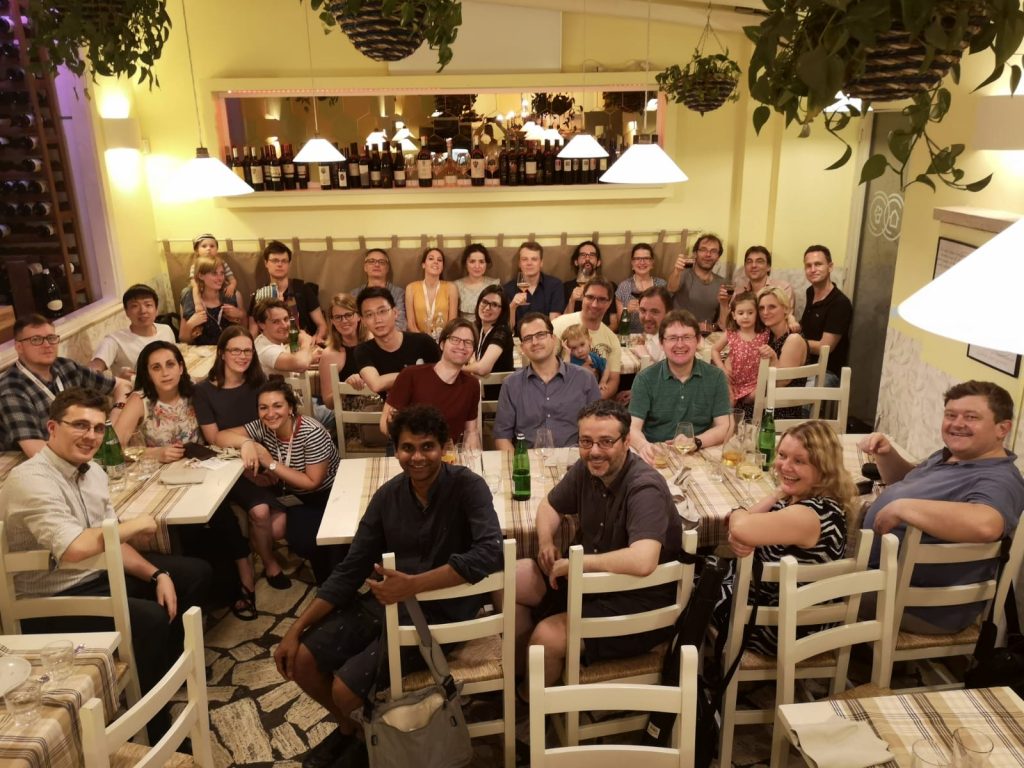 In spite of all the praise, unfortunately this year’s OHBM was also highly criticized by the attendees. Of course, the organization of such an event is not easy and takes a lot of effort. Many people spent an awful amount of time finding a venue and a suitable location, filtering out suitable presentations from a large number of registrations, planning the content of the event, securing catering, etc. Therefore, I would like to thank the organizers for this enormous achievement. Of course, not all wishes can be fulfilled and not everything can be organized perfectly. Some things happen unforeseen. That’s why I think that you should overlook some “first-world problems” and be happy about the things that went well. Yes, there were hardly any seats outside the lecture halls, the Wi-Fi could have been better, etc. But these are those issues are of minor importance. The only serious problem was the poster session. For those who weren’t there: An underground car park was completely encased with black carpet, the corridors within that area were limited to a width of approximately 3-4 meters and were completely overcrowded. It was hot, stuffy and loud. For those who had to present their posters it was a torture to stand there for a whole hour and for all those interested it was not much better. On top of that, the security concept was virtually non-existent, as there would have been only two small exits in an emergency. Unfortunately, this part of the day was absolute torture, which was a pity, as this event should actually serve for loose exchanges and developing new ideas. However, the poster reception in the evening alleviated the suffering at least a little. There, the exhibition area was much less crowded, which gave us finally the chance to study the posters and discuss the content unhurriedly. In addition, traditional snacks and drinks were offered every evening, which invited to stay a little longer than planned and exchange ideas in a relaxed atmosphere.

Very special praise of course goes to my brave colleagues, who did not let the heat of the poster session stop them from presenting their research results to the public. Therefore I would like to introduce them to you individually: 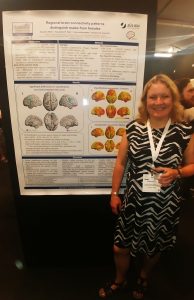 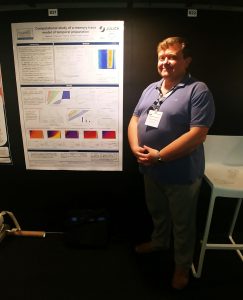 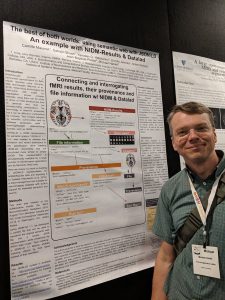 Michael Hanke – The best of both worlds: using semantic web with JSON-LD: An example with NIDM-Results & Datalad 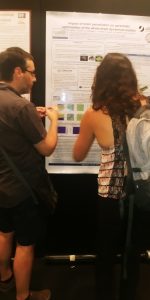 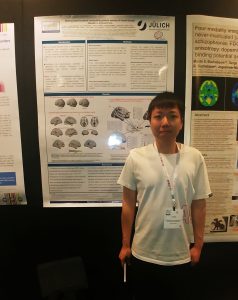 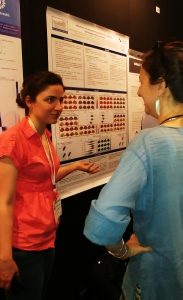 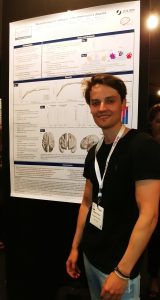 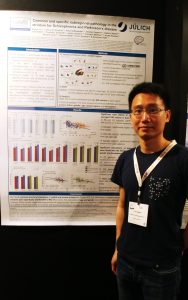 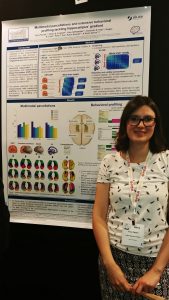 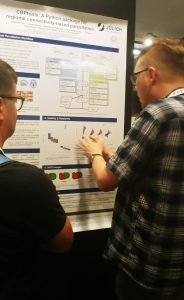 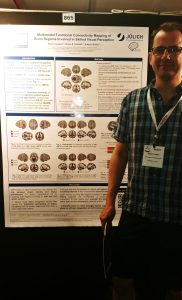 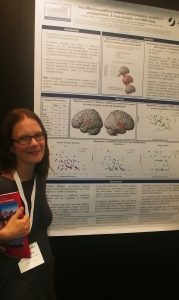 Veronika Müller – The affective auditory network and symptoms severity in schizophrenia: A meta-analytic and VBM study 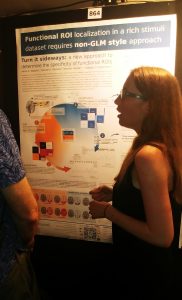 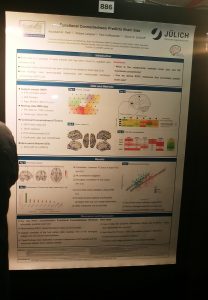 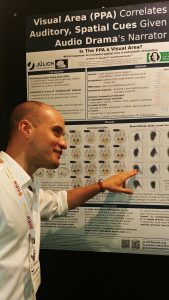 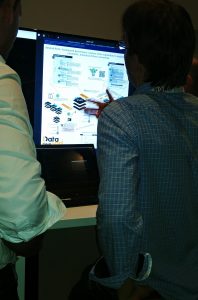 Benjamin Poldrack – One thing to bind them all: A complete RAW data structure for auto-generation of BIDS datasets 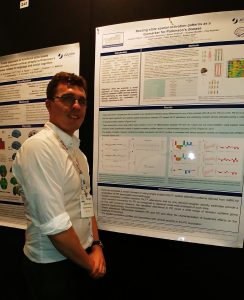 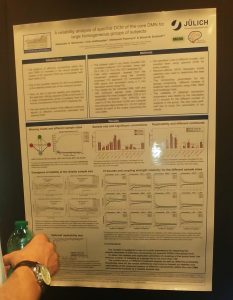 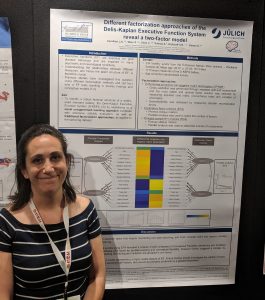 Strikingly, throughout the entire event, a unique spirit emerges, a very special connection between all participants, which you probably won’t feel anywhere else. All scientists are absolutely approachable, people interact openly, talking not only about scientific topics but also about private life, interests or hobbies and thereby establishing connections that go far beyond what would be possible in everyday life. Or would you otherwise meet top-class people like Alan Evans or Peter Fox for a chat at a party? 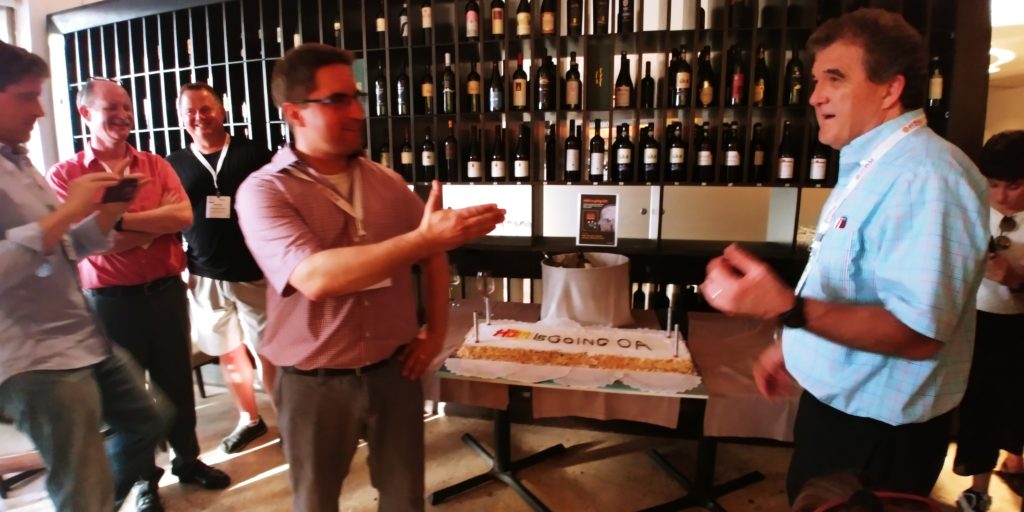 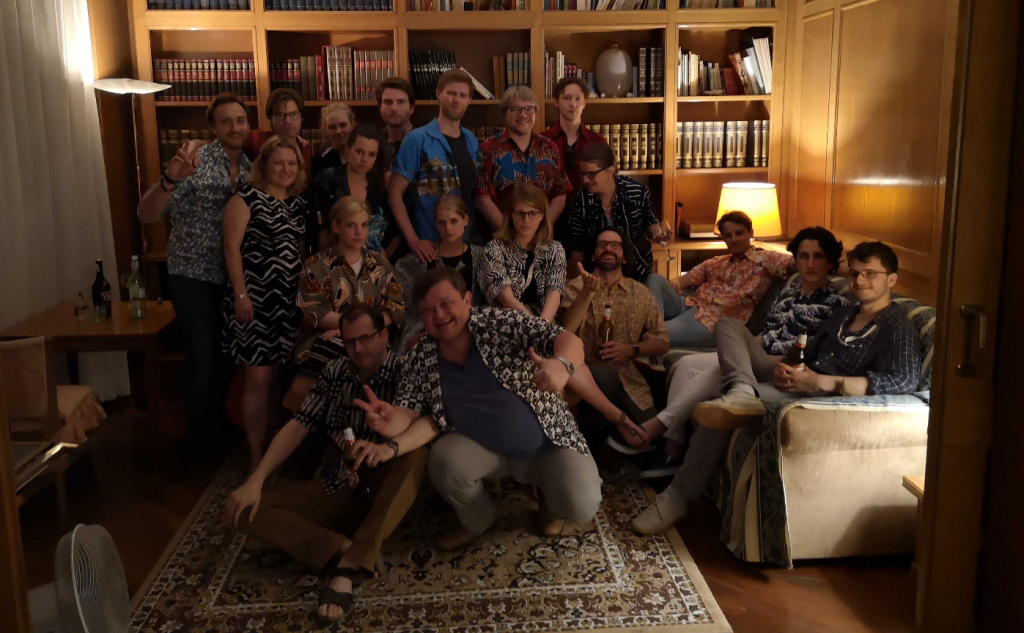 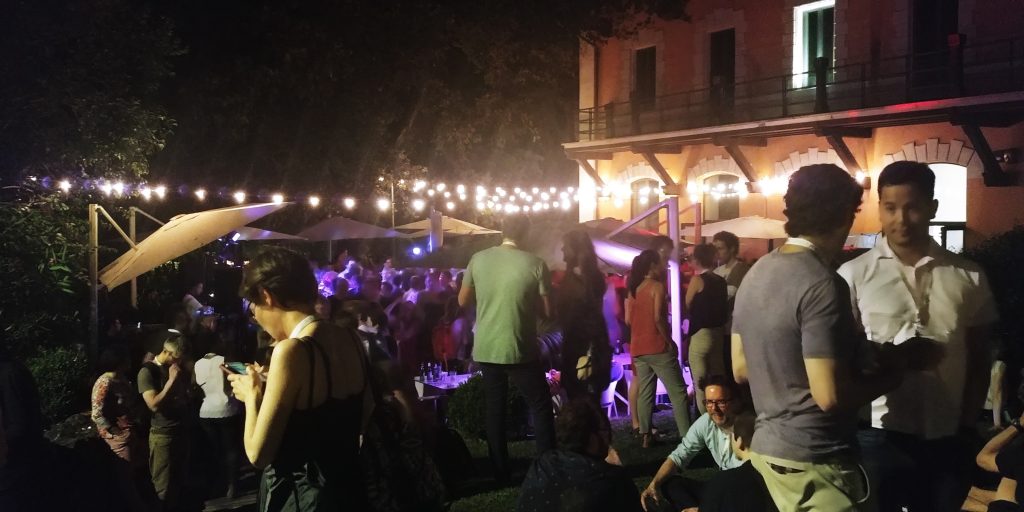 At this point, I would like to thank the organizers, my colleagues and all the participants for this indescribable conference! It was a unique experience for me to be there learning so many new things, meeting so many new people and making an even closer connection with my colleagues.

Anna Geiger started working as a scientific coordinator at INM-7 in 2018 after graduating with a Master's degree in Neuropsychology. Her main task is to make the research carried out at INM-7 accessible to the general public by presenting the scientific content as simple and comprehensible as possible.

You in Your Brain