On the level of doctoral researchers, the FZJ is quite international. Most of our international colleagues are coming from China and therefore, we want to dedicate this article especially to all Asian colleagues, employees and readers of this Blog!

Chinese New Year, also known as the “Spring Festival” in modern Mainland China, is an important Chinese festival celebrated at the turn of the traditional lunisolar Chinese calendar. In contrast to the western Gregorian calendar, which is based on the earth’s orbit around the sun, the Asian countries use the Lunar calendar that is based on the moon’s orbit around the earth. 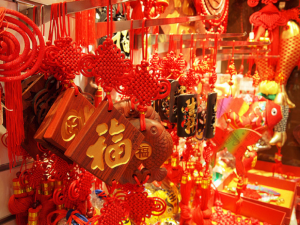 According to tales and legends, the beginning of the Chinese New Year started with a mythical beast called the Nian, which looked like a mixture of a bull and a lion. Nian would come to the villages to eat livestock, crops and even villagers, especially children. One year, all the villagers decided to go hide from the beast. An old man appeared before the villagers went into hiding and said that he’s going to stay the night, and decided to get revenge on the Nian. All the villagers thought he was insane. The old man put red papers up and set off firecrackers. The day after, the villagers came back to their town to see that nothing was destroyed. They assumed that the old man was a deity who came to save them and they learned that the Nian was afraid of red color, fire and loud noises. When the New Year was about to come in the next year, the villagers would wear red clothes, hang red lanterns, and red spring scrolls on windows and doors. People also used firecrackers to frighten away the Nian by creating noise and fire. From then on, Nian never came to the village again and it is said that the Nian was eventually captured by Hongjun Laozu, an ancient Taoist monk, to become Hongjun Laozu’s mount.[3] 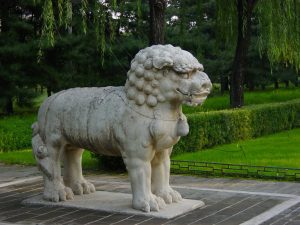 Preparations for the Chinese New Year festival begin long before its date, usually in a period of two weeks. In the People’s Republic of China, the New Year’s festival includes three public holidays, but traditionally the celebrations take place over fifteen days, from which usually five to eight days are off.  On the first four days, family visits and celebrations take place.  On the seventh day is “everyone’s birthday”, where one becomes one year older. Previously, in traditional China, individual birthdays hardly played a role compared to that day, which has changed in modern times. Also, during the entire festival, temples and ancestral sites are visited. The conclusion is celebrated on the 15th day of the new year with the Lantern Festival. The New Year is celebrated with fireworks, dragon and lion dances and is typically accompanied by Mahjong games. 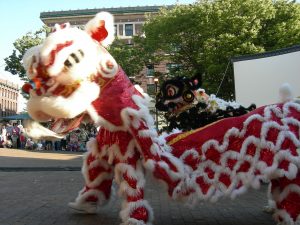 [1] And extremely rarely, 21 February, such as in 2033, the first occurrence since the 1645 calendar reform – Helmer Aslaksen, “The Mathematics of the Chinese Calendar”